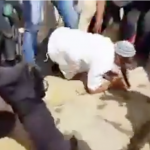 Two Jewish visitors bowed down while on the site, in contravention of the status quo that bans Jews (and only Jews) from praying while at their holiest site. After they did so, a number of Arabs attacked them, driving the pair to the ground. Continue Reading »

Jews attacked on Jerusalem Day at the Temple Mount for praying

Five Jewish men were arrested on Wednesday for quietly praying atop Jerusalem’s Temple Mount, an expression of faith that caused the many Muslims around them to explode in fury.

Police stationed at the sensitive holy site said a mob of Muslims gathered around the Jewish men, hurling insults and nearly coming to blows before Islamic officials stepped in to restore calm on the condition the Jewish worshipers be arrested.

Jews and Christians are forbidden to pray atop the Temple Mount for fear of upsetting the Muslims that currently control the complex. Continue Reading »