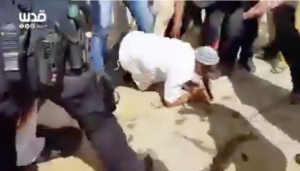 Two Jewish visitors bowed down while on the site, in contravention of the status quo that bans Jews (and only Jews) from praying while at their holiest site. After they did so, a number of Arabs attacked them, driving the pair to the ground. Police pushed back the rioters and forced the Jews to leave the site.

An official police statement says that, “As the last Jewish group finished its visit and left the Temple Mount, Muslim worshipers began yelling at the Jewish visitors. They were removed from the Temple Mount after violating the local restrictions. Police and Border Police at the scene distanced the Jews from the site. They continued working to prevent disruptions and restore calm.”