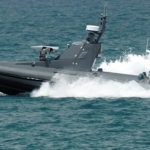 VIDEO: After two years of trials, the Sea Knight comes to replace an older, smaller, less efficient version, that’s been upgraded with heavier armaments and can participate in special ops without endangering soldiers’ lives.

The Israeli Navy’s 916th Company successfully concluded the experimental period of the first model of the Sea Knight—an unmanned vessel that was successfully put into action two years ago.

In most cases, it can be controlled from a mobile caravan located in the unit’s base in Ashdod. If necessary, it can also be operated from ships at sea during special operations.

The Sea Knight is an upgraded version of the Protector, both made by Rafael. Continue Reading »