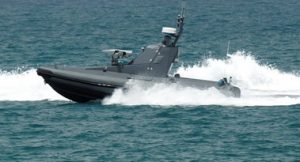 VIDEO: After two years of trials, the Sea Knight comes to replace an older, smaller, less efficient version, that’s been upgraded with heavier armaments and can participate in special ops without endangering soldiers’ lives.

The Israeli Navy’s 916th Company successfully concluded the experimental period of the first model of the Sea Knight—an unmanned vessel that was successfully put into action two years ago.

In most cases, it can be controlled from a mobile caravan located in the unit’s base in Ashdod. If necessary, it can also be operated from ships at sea during special operations.

The Sea Knight is an upgraded version of the Protector, both made by Rafael.

This is the first time a remotely controlled, unmanned, operational vessel can also fire missiles.

The model is still in development and will be added to the Navy in the future. At the same time, the unit has been developing a unique, first of its kind system that will intercept anti-tank missiles launched from the coastline at routine service vessels.

Unlike the Protector, which is the smallest, oldest unmanned navy vessel, the Sea Knight is both longer and larger in size, but also has a more substantial fuel tank and a larger range of communication that allows operational flexibility in remote areas.

The unit is set to receive three additional Sea Knights. Currently, the single vessel can patrol for 12 hours straight.

Transforming the Sea Knights into an actual unit will enable the use of unmanned vessels off the coast of the Gaza Strip 24/7. They reach a speed of up to 40 knots (about 74 mph).

The vessel also boasts remotely controlled machine guns as well as water cannons against rioters approaching on boats. The navy is already considering using the unmanned vessel in operative tasks should another war in the south break out.

“We will establish a very powerful unit of Sea Knights, with approximately 30 soldiers,” stated a naval officer to Ynet.

According to the officer, in the future, they will be able to upgrade the vessel and use it in a safer manner when dropping bombs and depth charge against enemy divers. They will also be able to install electronic combat systems onto it and use it to drag other vessels: “The vessel can reach as far as 500 meters from the coastline.”

In the past few weeks, the 916th Company has been increasing its vigilance off the coast of Gaza following the recent escalation in the south.

The Israeli Navy estimates that Hamas has dramatically upgraded its maritime capabilities, with an emphasis on the Hamas commando unit.

“Such an attack could serve as a decoy for a more substantial action taking place such as an infiltration of divers offshore and heavy rocket barrages toward strategic facilities in the south,” said the officer.