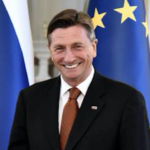 A statement from Pahor’s office carried by local media said the president “supports the diplomatic recognition of Palestine in circumstances where this recognition would help to regulate bilateral issues [between the Palestinians and] Israel, and not aggravate them.” Continue Reading »