Thousands of Israeli demonstrators, including public figures, Knesset members and artists, rallied together in Tel Aviv to demand the government to fully legalize cannabis use.

Last week, Minister of Public Security Gilad Erdan said that after reviewing the matter, he will seek government approval for the decriminalization of cannabis.

German Chancellor: Whoever attacks a Jew attacks us all

German Chancellor Angela Merkel and Jewish leaders spoke Sunday at a Berlin rally against anti-Semitism after the latest Gaza conflict sparked an upsurge in hate speech against Jews.

Under the banner “Stand Up: Jew Hatred – Never Again!” political and religious leaders and thousands of people gathered at the iconic Brandenburg Gate.

The event, attended by German President Joachim Gauck, coincided with a meeting in the capital of the World Jewish Congress (WJC), whose president Ronald S. Continue Reading »

Gaza’s “Tamarod” youth group uploaded a YouTube video calling on all Gazans to oust Hamas, which it calls out as “corrupt” & “tyrannical” in the name of religion.

As reported last month by Arutz Sheva, the Tamarod Movement in Gaza, recently inspired by the success of the Egyptian Tamarod Movement, is preparing for mass-demonstrations to oust the Islamic Gazan leaders of Hamas this coming November 11th.

“Tamarod” (“Rebel”) is the name of the popular anti-Islamist youth movement which led popular protests against Mohammed Morsi in the run up to his removal by the military.

Opponents and supporters of Mohammed Morsi clashed across Egypt on Friday, the day after the president granted himself sweeping new powers that critics fear can allow him to be a virtual dictator. At least 15 were reported injured.

In a sign of deepening polarization, state TV reported that protesters burned offices of the political arm of Morsi’s Muslim Brotherhood group on several cities on the Suez Canal east of Cairo and in the Mediterranean port city of Alexandria, while Islamists engaged with fistfights with Morsi opponents in southern Egypt. Continue Reading »

“The way the women were attacked shows the exact Hamas strategy & ideology which gives no room for women to express their opinions in Palestinian society,”

Ramallah: Hamas police violently attacked a group of women who were peacefully protesting on Tuesday in front of the Palestinian Legislative Council in Gaza. The women were calling for Palestinian reconciliation and sent a request to protest to Hamas which was ignored. Using sticks and batons, Hamas police attacked the women and dispersed the protest.

The Palestinian Authority on Saturday accused Hamas of exploiting peaceful protests against the high cost of living to spread chase and anarchy in the West Bank.

Adndan Damiri, spokesman for the PA security forces, also accused Hamas of working to overthrow the PA regime in the West Bank. 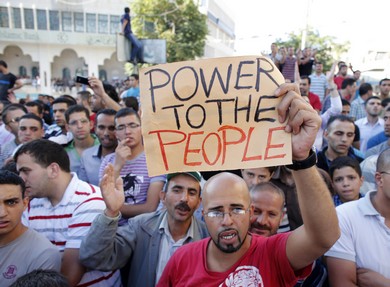 Damiri claimed that the PA security forces have received information about Hamas’s efforts to destabilize the situation in the West Bank.

Former chief of staff says politicians should take action rather than demonstrate. ‘We can’t let this issue turn into political capital; we can’t hide behind words’

Former IDF Chief of Staff Dan Halutz announced Saturday evening that he was leaving the Kadima Party over the issue of making military service compulsory for the Ultra-Orthodox.

“I’m leaving Kadima,” Halutz told Channel 2. “I urge everyone who joined Kadima because of me to reconsider his choice,” he said.

While Halutz backed Kadima Chairman Shaul Mofaz during the party primaries, he is now criticizing him for planning to join the protest. Continue Reading »

Police arrested 89 demonstrators after more than 6,500 people converged in and around Tel Aviv’s Habima Square on Saturday night, protesting the arrest on Friday of Daphni Leef, a leader of last summer’s social protest movement.

Police arrest a demonstrator during a protest for social justice in Tel Aviv. - Photo by Tomer Appelbaum

The protesters blocked Ibn Gabirol Street north to Rabin Square, before moving and blocking Ayalon highway. Around 20 demonstrators were removed by police after breaking into branches of Hapoalim, Leumi and Discount banks. Continue Reading »

Demonstrators attempt to erect tents, but city inspectors prevent them from doing so; police arrest Daphni Leef and other protest leaders.

Daphni Leef, one of the leaders of Israel’s social justice protest movement, was arrested by police on Friday afternoon during a demonstration on Tel Aviv’s Rothschild Boulevard.

The demonstration, which began around noon, was meant to revive the social justice protests that swept Israel last summer. Continue Reading »

More than 700 people, including students, youth movement members and leftists, attended a march in Jerusalem as part of May Day events.

Marching under the banner, “Workers not Slaves” the protesters carried signs that read “An entire generation demands a future” and “The people demand social justice.”

Ziv Rosenberg, one of the organizers of the event, told Ynet this was the first step in resuming last summer’s social protest. “We are here to say that any party that seeks election must provide solutions to the social demands raised in the past year.” Continue Reading »