Tag Archive for US Jordan 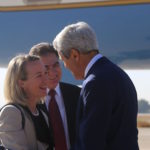 With Amman displeased by Obama policies, Ambassador Wells, who was due to transition out this summer, was rotated out in March after King Abdullah asked for her swift replacement.

WASHINGTON — A career US diplomat who served as ambassador to Jordan under the Obama administration was pushed out of her role by President Donald Trump shortly after he took office, allegedly at the request of the nation’s king, Abdullah II, a US magazine reported on Wednesday.

The article, published in Foreign Policy, claims that Alice Wells had a tense relationship with Abdullah throughout the final stages of Obama’s nuclear talks with Iran. Continue Reading »