The report follows bits of information published over the past several weeks, according to which Syrian soldiers were spotted mixing chemicals, but details of Israeli surveillance and American involvement were not previously disclosed.

IDF commanders informed Washington in November, according to the newspaper, after satellite imagery showed Syrian soldiers filling 500-pound bombs with a substance that may have been the deadly “sarin” nerve gas. Continue Reading »

Israel’s real fear is that Syria’s chemical weapons will fall into the hands of the rebels, who are not the “good-guy freedom fighters” most in the West portray them to be.

Various Western, Arab and Israeli media reports have been claiming for over a month now that Israeli special forces are on the ground in Syria in an effort to keep tabs on its chemical weapons stockpile.

Those reports mesh well with news that Prime Minister Benjamin Netanyahu visited neighboring Jordan this week to discuss with King Abdullah a possible air strike on the bulk of Syria’s weapons of mass destruction. Continue Reading »

Vice premier reports that the U.S. will intervene if chemical weapons are used on Syrian citizens, or if WMD’s fall into wrong hands

The U.S. is gearing up for a possible military intervention in Syria in the event that chemical weapons are used on Syrian citizens or alternately fall into the wrong hands, Strategic Affairs Minister and Vice Prime Minister Moshe (Bogie) Ya’alon told Israel Radio on Thursday.

According to the activists, scores of others suffered from side effects, including nausea, relaxed muscles, blurred vision, and breathing difficulties.

Residents said they did not know the nature of the gas sprayed. Continue Reading »

At some point, the various splinter groups may begin to also fight each other. But for now, they are still united against a common enemy: Assad.

According to Defense Ministry military expert Amos Gilad, for the moment, there appears to be a balance of power between Syrian President Bashar al-Assad and opposition forces. 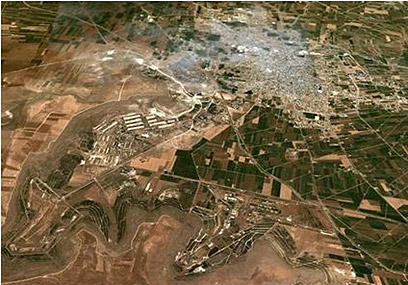 It is that delicate balance that is keeping the chemical weapons in check, Gilad told listeners in an interview broadcast Sunday morning on IDF Army Radio.  Continue Reading »

There’s a significant risk of proliferation to other groups, such as Hezbollah, which could pose a global terrorist threat

Two days after a mysterious explosion at a Hezbollah weapons depot in southern Lebanon, the Kuwaiti website Al Jarida is reporting that Israel bombed the site because Syria had transferred missiles there that were capable of being equipped with chemical warheads. The missiles had been moved into Lebanon from Syria in the last several months and were being held inside warehouses owned by farmers in the area. The report also claimed that Hezbollah has many additional warehouses across Lebanon that are used for the same purpose. Continue Reading »

Post commentator, David Ignatius spoke to a Syrian source who received information from a Syrian defector who worked inside a chemical weapons network.

The source was speaking with Ignatius from his hiding place in an Arab country outside Syria, with the “hope of encouraging greater American involvement with the opposition.” Continue Reading »

Syrian chemical weapons are still under the control of President Bashar al-Assad, contrary to reports saying Damascus could lose such arms in the chaos of civil war, Amos Gilad, head of the Defense Ministry Diplomatic-Security Bureau, said Sunday.

Syrian fighters check a tank they took after storming a military base in Aleppo on Nov.

Could Syrian President Bashar Assad be gearing to use chemical weapons on rebel forces? NBC News reported Wednesday that the Syrian military “has loaded the precursor chemicals for sarin, a deadly nerve gas, into aerial bombs.”

Citing US intelligence officials, the report said that Assad, who has been fighting to stay in power since March 2011, is prepared to use chemical weapons against his own people.

Syria is believed to have the largest stockpile of non-conventional weapons in the world, and according to the report, Damascus’ military is now awaiting the president’s order to strike rebel forces. Continue Reading »

Israel has consulted with Jordan twice over the issue of Syria’s chemical weapons arsenal, according to a report published Monday by The Atlantic, both times with plans to take out multiple sites. According to intelligence officials in two countries quoted by correspondent Jeff Goldberg, “Israel has been seeking Jordan’s ‘permission’ to bomb these sites, but the Jordanians have so far declined” to agree.

As Goldberg pointed out, Israel does not need Jordan’s approval to bomb an arsenal that could prove to be an existential threat to its citizens. Continue Reading »

Pentagon’s concern over Assad’s WMD stockpiles growing; Washington officials say that if the war escalates further, US may choose to send in troops to secure weapons depots

WASHINGTON – The Pentagon has made contingency plans to ensure that Syria’s massive unconventional weapons stockpiles are secure, the Los Angeles Times reported Thursday.

According to the report, the United States Department of Defense plans to send small teams of special operations troops into Syria should Washington feels that the depots are no longer secure, or that Syrian President Bashar Assadplans to use them on rebel forces. Continue Reading »

The US believes Syria is moving part of their chemical stockpile

WASHINGTON- US officials said that Syria has started to move part of its chemical weapons arsenal out of storage facilities, the Wall Street Journal reported on Friday. 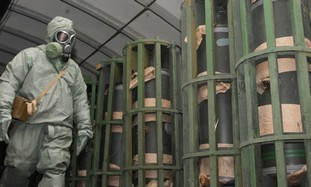 The country’s undeclared stockpiles of sarin nerve agent, mustard gas and cyanide have long worried US officials and their allies in the region, the report said.

Western nations have looked for signs amid the rebellion against President Bashar Assad’s government of any change in the location of those weapons, believed to be the world’s largest stockpile.