Terrorist Shot Dead in Hebron When Attacking Police With Knife

No injuries to security personnel at the Cave of the Patriarchs in the attempted attack by a screaming, knife-wielding Palestinian woman.

An Arab woman attempted to stab a soldier at a police checkpoint in Hevron Sunday afternoon. 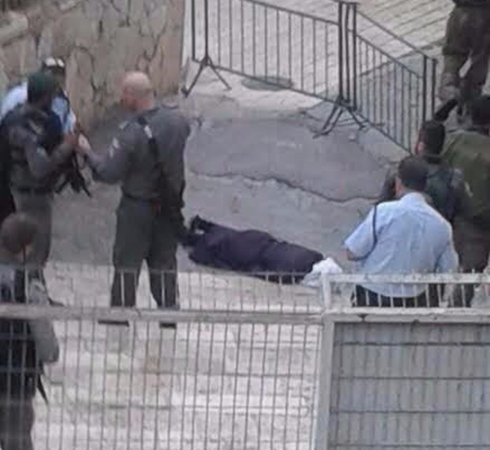 The terrorist after she was neutralized – Photo: Hebron security department

The terrorist was shot dead by alert border police officers before she was able to injure anyone.

The Arab terrorist approached the checkpoint close to the Cave of the Patriarchs and aroused the suspicion of border police stationed there.

When officers demanded she identify herself the attacker drew a knife and charged at them while shouting in Arabic; officers opened fire and neutralized her.

“A Palestinian woman acting suspiciously approached border police forces. She was requested to identify herself when she suddenly drew a knife and approached the forces yelling, the forces shot at her and neutralized her,” a police statement said.

It is the second such incident to take place Sunday, after an Israeli man was moderately wounded by an Arab terrorist in Gush Etzion, just north of Hevron.

In that case, two terrorists disguised as haredi Jews stabbed a 40-year-old man who got out of his car after other Arabs hurled rocks at it.