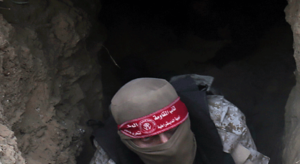 According to Palestinian media, the incident took place east of Beit Lahiya. Local rescue services rushed the injured to a hospital in the Strip and shortly thereafter Hamas’ Interior Ministry confirmed that one of its operatives had died in the incident.

Arab media issued conflicting reports about the cause of the collapse. Some reported it was the result of faulty construction, others said it was connected to a “malfunction” of contrabands smuggled into Gaza through the underground passageway, while some speculated that the tunnel collapsed after the IDF detected it and “employed special technological measures to make it collapse.”

The Israel military did not comments on the reports in Palestinian media.

Over the weekend, Israeli security forces detained four Palestinians who attempted to infiltrate into Israel by crossing the border fence from the Gaza Strip.

One of the four carried a knife, the IDF said in a statement.

i24NEWS contributed to this report.