The perfect itinerary for US Reps. Tlaib and Omar while in Israel 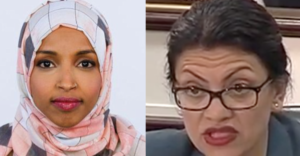 The upcoming visit by the two leading anti-Israel members of Congress is the perfect opportunity to document them seeing the real Israel, and introduce them to an avalanche of inconvenient truths.

US Reps. Rashida Tlaib (D-Mich.) and Ilhan Omar (D-Minn.) say they are going to Israel and “Palestine” in order “to learn” about the region. Israel has granted the women permission to enter the country, notwithstanding the overwhelming evidence that their trip has only one purpose: to strengthen the hand of people and organizations that share these women’s desire to destroy Israel, the nation-state of the Jewish people.

But just because Israel has let them in doesn’t mean its leaders have to sit passively by while Tlaib and Omar use the country as a backdrop for their personally designed advertisements for Hamas and Hezbollah; their accusations of apartheid, genocide and all other things repugnant; and their program to eliminate Jewish self-determination. On the contrary: As any fair-minded person knows, none of the things these women claim to believe about Israel is actually correct. So Israel has this one potent weapon on its side: the truth.

Israel should use it with these two hate-filled politicians. Israel should invite these American officials to the places that make it absolutely clear that everything important they claim to believe about Israel and its enemies is wrong.

The SodaStream factory. Moved from the disputed territories because of the vicious BDS movement protests, where it employed more than 100 Arabs working alongside Jews – at wages far in excess of what the Arabs could earn in Jordan, Gaza, Egypt or any Arab town in the territories themselves. SodaStream insisted on continuing to employ as many of its Arab workers as possible in its new factory inside the Green Line. Efforts by those boycotting Israel had exactly one effect on these people: They helped to dis-employ dozens of Arabs who are not able to reach the new location.

BDS victory against Israel….at the expense of the Palestinians

The Hamas tunnels. Let Israel help Tlaib and Omar “learn” by seeing firsthand what Hamas has done with millions of dollars it poached from international aid sent to Gaza, which was instead spent constructing tunnels designed for use by Hamas “fighters” – men trained not to confront enemy combatants, but to invade towns inside Green Line Israel and murder civilians in cold blood. While they’re at it, they might want to visit the thousands of dunams [acres] of scorched Israeli farmland caused by the weekly “peaceful protests” along Gaza’s border with Israel.

16.3 billion donated to Gaza and spent all on tunnels

The city of Haifa. Tlaib and Omar should be brought to Haifa, where the population of Israeli citizens is more than 50% Arab. Let them talk to Arabs in the Haifa city council and meet with Arabs on the faculty of Haifa University. Let them ask these people how many of them want to live instead in the Judenrein state that the Palestinian Authority wants to create.

Ir David [City of David]. Omar and Tlaib should join with other tourists walking on the road taken 2,000 years ago by Jews on their way to the Second Temple. Then they should be asked to explain how they can support the Palestinian Authority’s claim to Jerusalem and its absurd assertion – adopted by the great history scholars at the United Nation – that Jerusalem has no historical connection to the Jewish people. When Yasser Arafat tried that one on Bill Clinton, the Democratic US president remembered enough of the gospels he’d learned in Sunday school to know that if Jesus had preached outside the Jewish Temple in Jerusalem, it was ridiculous to argue that there had never been a Jewish Temple in Jerusalem. Ir David is located in a neighborhood that Arabs call “Silwan” – a name they gave the place after they drove out its original residents: Yemeni Jews who built some of the first homes outside the walls of the Old City of Jerusalem, which these Jews called Shiloach.

While they’re in Jerusalem they can meet with George Karra, an Arab justice on the Supreme Court. When he was a trial court judge, Karra presided over the criminal trial of former president of Israel Moshe Katsav – and convicted him. (Israel doesn’t have trial by jury.) Tlaib and Omar can be invited to wonder when the last time was that a Jew presided over a criminal trial of an Arab in any country in the world, much less when a Jew was given, and exercised, the power to send an Arab former president of any Arab country to jail.

The Rami Levi Supermarket in Gush Etzion, where Arabs and Jews work and shop together, and where every aisle clerk and cashier earns the same salary, regardless of religion. And the Malcha Mall in Jerusalem itself, where Arabs and Jews shop and eat together every single day. Here, Tlaib and Omar can see Jewish apartheid as it really is – that is to say, as it isn’t at all.

Rawabi, just up the street from Ramallah. No Jews are allowed into this fabulously wealthy Arab enclave just outside of Ramallah. But the beautiful mall, gracious apartments, clean streets and uninterrupted electricity, gas and water show just how bitter is the oppression wrought upon Arabs by their Jewish neighbors. Of course, residence in Rawabi is available only for those people approved, one at a time, by the Palestinian Authority, just as access to well-stocked stores is available in Havana only to members of the ruling party. Oppression of Arabs in all the towns that don’t have the advantages available in Rawabi? Yes, indeed. By Jews? Not so much (as in not at all).

Hana and her daughter Tuqa in their new apartment in Rawabi. – Photo: The Media Line

After they’ve completed this short itinerary, Tlaib and Omar should then go on their way to whatever Potemkin villages of oppression, unemployment and misery their Arab hosts will have prepared for them. By all means, let Tlaib and Omar use these scenes as sets for the scripts they have no doubt already written in support of their well-known anti-Israel and anti-Semitic views. Surely, there will be quite a few “Benjamins” exchanging hands to these gentlewomen by wealthy supporters hoping to ensure a horrific public-relations’ disaster for Israel.

But at least Israel will have footage of these women being confronted by the truth. Some day, to some people, that might make a difference.

If, as it seems likely, Tlaib and Omar refuse to see the facts on the ground that give the lie to their accusations, it would still be fun to have someone go with two empty chairs or seats in a tour bus, and take the trip that these women were invited to take, but were too afraid to go on. That fear of reality is, itself, a very important fact.