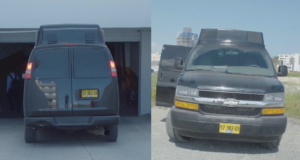 According to the police, the three suspects, who are employed by the company that owns the van, are expected to appear before a court in the southern coastal city of Larnaca on Friday.

The vehicle, said to be worth some $9 million, is owned by Cyprus-registered company WiSpear, whose Israeli CEO Tal Dillian is said to be a former Israeli intelligence officer.

Dillian was reportedly questioned by the Cypriot police in mid-November; in December, he issued a statement, lashing out at “amateurish” police for prolonging a “witch-hunt” against him.

The case began with a Forbes report on Dillian and his ‘spy van’ in early August, which went viral on the Mediterranean island.

Forbes said multi-million-dollar equipment in the van can monitor electronic devices within a 500-meter radius, hack any phone and listen in on conversations regardless of the level of encryption.

The van was seized on November 17 in Larnaca and is still in the possession of the police.

WiSpear denies any wrongdoing and says the van was not used to spy on anybody in Cyprus.