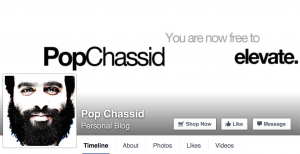 Elad Nehorai, the Jewish blogger of ‘Pop Chassid’, successfully raised enough money through crowdfunding for a full-page ad in the NY Times to counter the media bias.

NEW YORK, NY – As the wave of terror in Israel continues to make international headlines, social media has been flooded with angry posts by Jewish and Israeli people from around the world complaining about the foreign outlets’ coverage of events. For some it is too minimal, for others, it it too biased against Israel.

Elad Nehorai, who runs the Jewish blog Pop Chassid out of Brooklyn in New York, has felt very frustrated following the US media.

“Every year it’s the same thing: Israel gets this violence, Israel responds and only then it’s front page news and people think Israel is the aggressor,” he told The Jerusalem Post.

“It’s become really like a meme on Facebook among people who are pro-Israel,” he added, “They talk about how the media is not reporting, or reporting badly and when I read this I sense hopelessness from them, like there is nothing we can do. That’s a very crippling feeling.”

Nehorai felt something needed to be done, so he turned to the place he is most familiar with: the Internet.

Last week, he started a crowdfunding page on gofundme.com in order to raise enough money to buy a full page ad in the New York Times. The goal is to use it to publish a “comprehensive list of all the attacks against the Jewish people of Israel” and expose the paper’s readers to “the other side of the story.”

“I wanted to make a statement,” he explained, “The media is not telling our story and we know for a fact that the moment Israel starts responding in any kind of strong way, it’s gonna be a front page headline.”

At the beginning of his campaign Nehorai had needed to raise $118,000 dollars. But after gaining more and more popularity online, Nehorai’s initiative was noticed by the organization StandWithUs, which advocates for Israel. StandWithUs offered to let him buy the advertisement under its nonprofit status, which significantly brought down the price.

The new goal was set at $33,000 and with hundreds of people donating to the cause, it was reached a day before the set deadline, on Wedenesday morning.

Beyond balancing out the New York Times’ coverage of Israel and perhaps convincing some readers to look beyond the headlines, he hopes the ad will “unify people who feel they don’t have a voice.”

“It’s hard especially for diaspora Jews, but a lot of Israelis also feel very alone,” he told the Post, “so what I wanted to do in a sense, is give a gift to all these people.”

“It’s wasn’t a political thing, it’s more that there is an injustice in the world, people are feeling voiceless and hopeless and I wanted to give people hope in that sense.”

In the past couple of years Nehorai’s blog Pop Chassid has gained much popularity both within the Jewish community but also among non-Jews.

Since starting the campaign, he said he has noticed a drop in entries on his site and in the number of his social media followers, who say he has betrayed his reputation as a uniter between people.

But the issue of Israel’s image abroad is too important to Nehorai.

Nehorai has been updating the text for the ad to include the latest attacks in Israel and working with a graphic designer to make it as appealing as possible. He said hopes that “at the very least, this will help educate the New York Times’ readers, if they are not already.”

While close to a thousand people donated funds to the initiative, the gofundme.com page has been shared on social media by over 8,000 people. Nehorai will submit the ad to the New York Times for publication this Saturday.