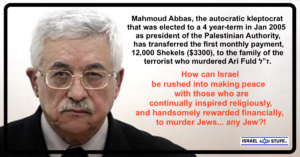 Responding to reports that the family of the killer of Ari Fuld, an American citizen, would receive official compensation for the terrorist act, a White House official noted that recent congressional legislation compels the administration to “restrict the use of Economic Support Funds that directly benefit the Palestinian Authority” unless the State Department “certifies that the PA has taken steps to end the practice of providing payments to individuals, and families of individuals, who committed acts of terrorism.”

“As we’ve seen from today’s announcement by the Palestinian Prisoner Affairs Commission with respect to the terrorist who killed Ari Fuld, the practice continues,” said Edgar Vasquez, a White House spokesman. “This is unconscionable and must stop if there is to be any hope for peace.”

Vasquez said the administration “strongly supports” the bill signed into law in March of this year, called the Taylor Force Act, named after the US Army veteran and Vanderbilt graduate student killed in a terrorist attack in Jaffa in 2016. The law would halt funding the PA– except for three exceptions– unless the State Department reports an end to the payment scheme.

“The Palestinian Prisoner Affairs Commission has confirmed that the family of the terrorist who murdered Ari Fuld is ‘eligible to receive a monthly salary’ as compensation for his incarceration,” Friedman wrote of the practice, which he also characterized as “unconscionable.”

Two days earlier, US Mideast envoy Jason Greenblatt tweeted a link to a Jerusalem Post story reporting that the family of Khalil Yusef Ali Jabarin, the terrorist who murdered the 45-year-old Fuld on Sunday, would receive a NIS 1,400 monthly stipend for the next three years from the Palestinian Authority.

“Some people are complaining about US cutting funds to the Palestinian Authority. But the PA continues to pay terrorists – in this case the terrorist who on Sunday murdered in cold-blood Ari Fuld, an Israeli-American father of four,” he wrote.

In July, Israel followed the US lead and passed the “pay for slay law,” which mandates that the government must deduct the money the PA pays to terrorists and their families from the tariffs it collects for and transfers to the PA.

The PA has acknowledged that in 2017 and 2018 its annual budget for these payments was NIS 1.2 billion ($330 million). But Palestinian officials in Ramallah on Thursday denied that the PA had paid any money to the family of Khalil Jabarin.

The officials said the reports in the Israeli media that claimed that the PA had paid NIS 12,000 to the terrorist’s family were “blatant lies.”

A senior PA official claimed that the reports were in the context of Israeli “incitement” against the PA leadership and its president, Mahmoud Abbas.

Another official said he did not rule out the possibility that Jabarin’s family would be entitled in the future to financial support from the PA. “If the family applies for financial aid, we will consider it positively,” the official said. “But this is a process that could take several weeks or months.” He said that so far the family has not requested financial aid from the PA.