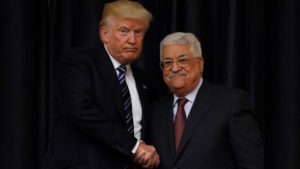 As published in the Israeli media, come September, Trump is going to denounce Palestinian claims to a “right of return” to Israel. If this news is accurate, it would be one of the boldest attempts ever to transform “peace” from an Israel-bashing slogan to reality, and this is why.

Yemenite Jewish refugee family walks through the desert to a way-camp on their journey to Israel. (circa 1950)

Of all millions of refugees worldwide following WWII, the only ones remaining today are the Palestinians. During the 1948 War of Independence, some half-a-million Arabs fled Israel. In about the same time, some 700,000 Jews fled Arab countries, and not a single one of them was ever recognized as a refugee.

Shortly after the war, UNRWA came into being. Its mandate was similar to other UN refugee relief organizations, which was to help governments absorb the refugees who found refuge in their countries. However, UNRWA has created an unprecedented refugee status only for Palestinians. Instead of helping them begin a new life in their new host countries, UNRWA turned these refugees into a permanent hereditary status. By so doing, instead of solving the problem of Arab refugees (later to be called Palestinians) it has perpetuated it. Today, according to UNRWA and the Palestinians, there are five million refugees waiting to return to their homes under the pretense of a new “human right,” reserved only for Palestinians, “the right of return.”

The right of return, to clarify, is not to the “occupied territories,” but to every Arab village and town deserted in 1948. This is the right of return to Tel Aviv, Haifa, Kibbutz Zorah, Ashkelon, Ashdod. The “Palestinian refugee,” therefore, is a political, not a humanitarian, problem. The reason for keeping the issue alive and turning it into a matter of human rights, of all things, was never kept secret. The refugees represent the Palestinian hope of eradicating Israel. This means that UNRWA and the countries supporting it are nourishing the hope of Israel’s demise. To support UNRWA is to fuel the conflict, not help resolve it.

This can be seen ever so clearly in Gaza, where UNRWA facilities are used as sanctuaries for terrorists and as lecture halls for incitement and hate. UNRWA is the vehicle through which Hamas is legitimized, and its “marches of return” are used to turn Israel into a pariah state for daring to stop Gazans from returning to their abandoned villages in Israel.

Trump’s new policy, which will cap the number of Palestinian refugees at half-a-million, is a devastating blow for the perverted hope of destroying Israel, which is why this policy has a chance to force the Palestinians into serious peace talks, a thing no one has the right to oppose.