Turkey’s Foreign minister in Ankara says “all options on the table…Turkey will take whatever measures necessary within the framework of its own strategic interests,”

WASHINGTON/ NEW YORK — Turkey has placed its armed forces on alert in light of possible security threats from Syria as the West continues to discuss military action on the Damascus regime in response to a supposed chemical weapons attack, Turkish Foreign Minister Ahmet Davutoglu said on Wednesday. 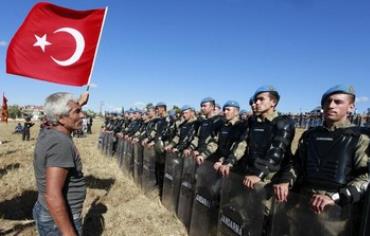 Davutoglu asserted that “all options are on the table” for Turkey to address the use of chemical weapons in Syria on a massive scale.

Turkey’s allies in Washington, London and Paris have been weighing military intervention in Syria’s harsh civil war since last week, after a chemical attack in the Damascus suburb of Ghouta killed over 1,000 civilians on August 21.

“We are now at a more alert position… Turkey will take whatever measures necessary within the framework of its own strategic interests,” Davutoglu told reporters.

“The Turkish armed forces have the mandate to take every measure against any security threat from Syria or elsewhere… and retaliate within the rules of engagement.”

Turkey has been bullish on Syria throughout its civil war, openly supporting rebels fighting Syrian President Bashar Assad– including the al-Nusra Front, an affiliate of al-Qaida.

On Monday, one senior Turkish official told a local media outlet that his government was considering making their Incirlik air base available to NATO should the Western coalition, led by the United States, choose to proceed with military intervention.

Incirlik was used by NATO in operations in Iraq and Kosovo.

At United Nations headquarters on Wednesday, Syrian ambassador “His Excellency Bashar Ja’afari pushed back against claims that his government had used chemical weapons in Ghouta.

“Members of the Syrian army inhaled poisonous gas as a result by the use of terrorist armed groups of chemical agents close to what we call the nerve gas Sarin,” Ja’afari said. “Dozens of Syrian soldiers are in Syrian hospitals due to this use of chemical agents  by the armed terrorist groups in the countryside of Damascus.”
A year ago, “the Turkish media mentioned that twelve terrorist members of Jabhat al-Nusra, al Nusra Front, were arrested within Turkish territory carrying with them two liters of the sarin gas. These two liters of the gas were taken with them from Libya on board civilian airlines to Turkey and the confession given by these terrorists was that they intended to use it in Syria.”

“For decades to notice that the American diplomacy has always been motivation by defending Israeli interests. And all of this instability in the Arab world, including in Egypt and Lebanon, Syria, Libya, Tunisia, and elsewhere and the spread of al-Qaida activities and these kind of terrorist networks operating in the Sahel area of North Africa, all this has only one goal, which is deviating attention from the Palestinian question.”