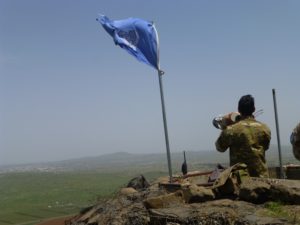 Israel has increasingly sought Russia’s involvement in securing its frontier with Syria and in scaling back Iran’s influence in the area. Russia, Syria’s weightiest ally, has in turn sought coordination with Israel as a bridge with the United States in dealing with Syria’s complex civil war, which began in 2011.

Israel considers Iran’s growing influence in Syria – it has advisers and allied militias fighting alongside Syrian troops – as an existential threat and had looked for guarantees from Russia to push pro-Iran fighters away from its frontiers.

Col. Gen. Sergei Rudskoy of the Russian General Staff said conditions have been created for the resumption of U.N. peacekeeping patrols along the buffer zone separating Syria and Israel.

Rudskoy said Russian military police have accompanied the peacekeepers on patrols, and that eight Russian-manned observation points opposite the U.N. points will be set up “to rule out possible provocations.”

When the situation stabilizes, the Russian-manned posts will be handed over to Syrian government forces, Rudskoy said.

Israel acknowledged a return to normalcy along the border.

Israeli Defense Minister Avigdor Lieberman said the situation on the Syrian side had returned to its pre-2011 state since Syrian government forces, supported by Russia’s military, regained control of the region from the armed opposition that had controlled it since 2014.

Lieberman said Israel has “no cause to intervene or operate in Syrian territory” ass long as Syria respects the 1974 disengagement agreement between the two sides and as long as Syria does not become a staging ground for Iranian forces to attack Israel or transfer arms to Hezbollah in Lebanon.

The area, peaceful for decades since the 1974 agreement, became a battleground during the Syrian civil war. UNDOF troops were pushed out in 2014, after al-Qaida militants kidnapped 45 U.N. peacekeepers. They were released two weeks later.

The area became particularly volatile in recent weeks as the Syrian government launched an offensive to retake territories controlled by the opposition near the border. Israel has also upped its strikes against suspected Iranian targets inside Syria.

A day before the joint Russia-U.N. patrols, Russia announced it had reached an agreement with Israel to keep pro-Iranian fighters 85 kilometers (53 miles) from the volatile frontier.

It was the first publicized result of Russian mediation.

Russian officials said Russia gave Israel guarantees that the zone would be clear of pro-Iranian fighters,  but warned it would be unrealistic to expect Iran to fully withdraw from Syria.

Israel has demanded that all Iranian command posts ‎near the Syrian capital be removed from the area. But the chances of that are slim as President Bashar Assad is still ‎fighting some pockets of resistance across the ‎country and the Iranian presence is crucial to his ‎success.

During their summit in Helsinki in mid-July, Russian President Vladimir Putin and U.S. President Donald Trump said they were exploring ways to protect Israel from the war in Syria. They did not elaborate, but later Putin said he agreed with Trump on securing Israel’s border with Syria in line with the 1974 deal.

A week later, Russian Foreign Minister Sergey Lavrov flew to Jerusalem and met with Israeli Prime Minister Benjamin Netanyahu for talks focused on the Iranian presence in Syria. Netanyahu stressed the “extraordinarily important” link between Russia and Israel. The two sides discussed a Russian proposal to keep any forces linked to Iran distanced some 100 kilometers (62 miles) away from the Golan Heights.

Reflecting the tensions along the border, Israel’s military said Thursday that its aircraft fired on “several armed terror operatives in the southern Syrian Golan Heights” overnight and that troops were on high alert.

IDF Spokesman in English Lt. Col. Jonathan Conricus said he could not immediately comment on the U.N. deployment on the Syrian side of the border.

Conricus said the IDF targeted and killed seven terrorists who had attempted to cross into Israeli territory late Wednesday. He said a preliminary assessment was that the infiltrators were Islamic State militants.

Speaking to reporters Thursday, Brig. Gen. Nitzan Nuriel, former head of the Counterterrorism Bureau at the Prime Minister’s office, said Israel should be on alert in the area because “a year from now, Syrian government troops will not be able to control those who are trying to attack the State of Israel from that border.”

He said Israel would not accept any changes to the 1974 deal or the presence of any Syrian troops or allied militias inside the disengagement zone.

Safadi said Jordan has been in discussions with Russian authorities, and would respond to Syria’s request “positively” in a way that supports Jordanian and Syrian interests.