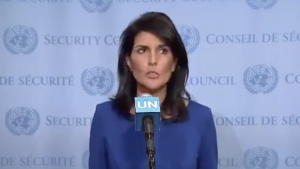 WATCH U.S. envoy to the UN Nikki Haley tells Security Council, “The incredibly destructive nature of Iranian and Hezbollah activities throughout the Middle East demands much more of our attention. It should become this council’s priority in the region,” instead of engaging in what she called “routine Israel-bashing.”

U.S. Ambassador to the United Nations Nikki Haley accused Iran and its ally Hezbollah on Thursday of conspiring to destabilize the Middle East — a charge “categorically” rejected by Iran’s U.N. envoy as a “misleading propaganda campaign” perpetrated by Israel and others in the region.

Haley, the current Security Council president, asked members to focus on the factors causing conflicts across the region during their monthly meeting on the situation in the Middle East, instead of engaging in what she called “routine Israel-bashing.”

Her targets at the open meeting, where representatives of more than 50 countries spoke, were Iran and Hezbollah, which are supporting Syrian President Bashar Assad, training deadly militias in Iraq and arming Shiite Houthi rebels in Yemen.

“Iran is using Hezbollah to advance its regional aspirations,” she said. “They are working together to expand extremist ideologies in the Middle East. The incredibly destructive nature of Iranian and Hezbollah activities throughout the Middle East demands much more of our attention. It should become this council’s priority in the region.”

U.S. Secretary of State Rex Tillerson on Wednesday accused Iran of “alarming ongoing provocations” to destabilize countries in the Middle East as the Trump administration launched a review of its policy toward Tehran, including a 2015 nuclear deal.

Iranian Ambassador Gholamali Khoshroo minced no words when it was his turn to speak, accusing the U.S. and Israel of seeking “to remove the Palestinian issue that is central to all the conflicts in the Middle East from these open debates.”

As for the U.S. accusations, he dismissed them as “unsubstantiated allegations … designed and perpetrated hysterically by Israel and certain countries in the region including those who fully supported [Iraqi dictator] Saddam Hussein’s aggression against Iran.” Saudi Arabia and other Arab nations backed Saddam in the 1980-1988 Iran-Iraq war.

Only one of the 14 other Security Council members mentioned Iran while they all talked about the current worsening state of the decades-old Israeli-Palestinian conflict as well as Syria.

Nickolay Mladenov, the U.N.’s special envoy for the Middle East, did not mention Iran either — just Syria, Lebanon, Libya, Iraq and Yemen.

He stressed that a two-state solution in the Israeli-Palestinian conflict “remains a potent symbol and rallying cry that is easily misappropriated and exploited by extremist groups.”

Haley thanked him “for going beyond the usual Israel bashing” and looking at the broader issues.

British Ambassador Matthew Rycroft, the only council member to mention Iran, also accused the Islamic republic of playing “a destabilizing role in the region,” especially in Syria. He cited a U.N. report saying Iran supplies all the weapons and missiles to the Assad government.

But Rycroft also focused on this year’s 50th anniversary of the Six-Day War between Israel and the Arabs.

“This year either we move towards peace, with the strongest support of the region and the international community, or we face an uncertain and dangerous future,” he warned. “Unless the parties show leadership, including the willingness to make tough compromises, the risk of terrorism and instability will increase. Israelis and Palestinians cannot afford another 50 years of that.”

Russia’s deputy U.N. ambassador, Petr Iliichev, said Moscow wanted “to express our categorical disagreement with the attempts to tailor this meeting to the domestic context and exclusively to American foreign policy focus.”

He questioned why the U.S.’s “concept note” for the meeting remained silent on the Palestinian question and did not mention threats from extremist groups such as Islamic State and the former Nusra Front “who cause suffering to civilians in Syria, Iraq and Libya.”

“Indeed we’re invited to consider as terrorists those who are fighting these groups,” he said.

As for the Israeli-Palestinian conflict, he called for coordinated efforts on a Middle East settlement and repeated Russia’s offer to host a meeting in Moscow between Israeli Prime Minister Benjamin Netanyahu and Palestinian Authority President Mahmoud Abbas to start direct negotiations.

Riyad Mansour, the Palestinian ambassador, leads the Israel-bashing at the UNSC – Screenshot: UNWATCH/YouTube

Riyad Mansour, the Palestinian ambassador, thanked almost every speaker for keeping the Palestinian question at the center of the debate and speaking out strongly in support of a two-state solution.