U.S. District Court throws out $1B Palestinian lawsuit against U.S. supporters of Israel 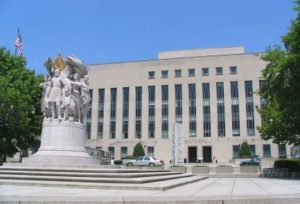 In its preliminary stages, a US District Court dismissed a $1 billion complaint, expressed in a 100+ page diatribe against 49 defendants, that attempted to describe a so-called int’l conspiracy to ‘cleanse’ what are called the ‘Occupied Territories’ of non-Jews and, without the support of anything verifiable or legal precedents, made numerous conclusory allegations of ‘war crimes,’ ‘torture,’ etc. etc.

Israel has won a significant legal victory: A U.S. federal court dismissed on Tuesday a billion-dollar lawsuit for damages filed against some 50 people and organizations (including the U.S. government) for their support of or activity in Israel.

The lawsuit, filed by a group of Palestinians and Palestinian-Americans, including Bassem al-Tamimi from the village of Nabi Salah, claimed that organizations that supported Israel and donors to Israeli organizations were committing war crimes and crimes against humanity and even working to expel all non-Jewish residents of east Jerusalem, Judea and Samaria. The original version lawsuit sought $35 billion in damages.

The court dismissed the lawsuit in its preliminary stages and even attacked the would-be plaintiffs, saying that their suit was replete with major legal difficulties. First and foremost, the court said, it was an attempt to drag the court into political or procedural issues, including the matter of Jerusalem’s future borders and Israeli sovereignty in general.

“This issue, both close to the heart of the ongoing Israeli-Palestinian conflict and central to the United States’ foreign policy decision-making in the region, is simply inappropriate for this court to resolve. Instead, these issues must be decided by the political branches,” ruled District Court Judge Tanya S. Chutkan, thus granting both motions to dismiss the suit.

The litigants included Israeli banks and companies that operate in the U.S. in the suit. They also claimed that nonprofit groups that donated to projects beyond the Green Line were guilty of money laundering and fraud, and were indirect participants in killing Palestinians. The suit claimed that former President George W. Bush’s deputy national security adviser Elliot Abrams had spearheaded a policy of ethnic cleansing because he had “pressed senior advisers in the government of [former Israeli prime ministers] Sharon, Barak, Olmert and settlement officials to annex privately owned Palestinian lands.”

The judge wrote in a summation on Tuesday that the plaintiffs’ claims contradicted the fact that the lawsuit was, at its core, “a demand that this court rule on an issue that lies at the heart of the Israeli-Palestinian conflict.”

Barry Felder, who along with Michael Tuteur and Rachel Kramer, all from Foley & Lardner LLP, represented Adelson in the case, told Israel Hayom on Wednesday that the court’s decision to reject the lawsuit comprised a significant victory, with important future ramifications.

“The plaintiffs, largely Palestinian, sought to use the court system as a vehicle to publicize their political goals. The complaint was a 100-plus page diatribe against 49 defendants that attempted to describe a so-called international conspiracy to ‘cleanse’ what are called the ‘Occupied Territories’ of non-Jews and, without supporting detail, made numerous conclusory allegations of ‘war crimes,’ ‘torture,’ and the like.”

According to Felder, the presiding judge understood that cooperating with an experiment such as the lawsuit would be “wholly inappropriate,” and therefore decided to dismiss it at such an early stage, “without the need for witnesses or a trial.”

Felder also said that the decision comprised a sort of precedent that would help fight the litigization in the U.S. of the Israeli-Palestinian conflict, and that he expected that the decision would “set the groundwork for plaintiffs in those cases, and their counsel, to be sanctioned for pursuing frivolous claims.”