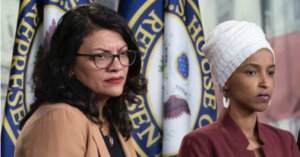 The House bi-partisan resolution puts Congressional Representatives on record opposing the anti-Israel supporters of the BDS movement and their efforts to target U.S. companies that do business with Israel.
– The anti-BDS resolution passed on an overwhelming vote of 398-17.
– Entire Resolution, H. RES. 246, included.

The House overwhelmingly approved a resolution Tuesday opposing an international effort to boycott Israel, a rare bipartisan vote as Democrats try to tamp down increasingly heated political rhetoric over differences with the longtime U.S. ally.

Democrats have been wrestling with the issue all year. Liberal lawmakers, most notably Reps. Ilhan Omar, D-Minn., and Rashida Tlaib, D-Mich., two newly elected Muslim Americans, have spoken out about the Boycott, Divest and Sanctions movement, known as BDS, as they criticize Israel’s treatment of Palestinians, particularly in the occupied territories.

Republicans have amplified the views of the left flank to portray Democrats as deeply divided and at odds with Israel.

Ahead of voting, the bill’s chief backers warned against the stark framing as dangerous for both countries.

“This issue has been politicized in a way that I find ugly and ultimately harmful to the U.S.-Israel relationship,” said Rep. Eliot Engel, D-N.Y., the chairman of the Foreign Affairs Committee.

House Democrats have been eager to vote to show support for Israel and, for those lawmakers from more conservative areas, to resist having the party be defined by its most liberal members.

Rep. Steny Hoyer, D-Md., the majority leader, had promised lawmakers the bill would come up for a vote before the August recess.

It’s a way to shield House Democrats from continued Republican efforts to attack them around the issue of Israel, according to a Hoyer aide who spoke on condition of anonymity to discuss the private conversations.

Omar, a member of the Foreign Affairs Committee, was among the only lawmakers to voice objection when the bill was included in a package the panel approved last week.

“What are we doing to bring peace? I believe that simple question should guide every vote we take in this committee,” said the freshman lawmaker, who came to the U.S. as a refugee from Somalia when she was a child and became a U.S. citizen.

Omar has been outspoken against Israel, once tweeting that lawmakers were supportive of the Jewish state because they were essentially being paid to do so.

It was widely considered a slur that relied on a trope against Jewish people, and she later “unequivocally” apologized.

Trump called her apology “lame” and Republicans have continued to stoke opposition to her views as part of the “squad” of liberal freshmen lawmakers.

Trump stood by last week at a campaign rally as the crowd chanted about Omar, “Send her back.”

Omar, who was among a handful of Democrats who voted against the bill Tuesday, said she supports the long-held U.S. goal of a “two-state solution,” one for Israel and one for Palestine.

But she said during the committee hearing last week that “truly achieving peace” means “ending this occupation” of Israeli settlements.

The House has struggled with the issue since the start of the year, after an earlier version passed the Senate.

Senate Majority Leader Mitch McConnell, R-Ky., had introduced it as the first bill of the new Congress, and brought it forward repeatedly for votes until it ultimately passed, also with robust bipartisan support.

But the Senate bill, which was part of a broader foreign policy package, stalled in the House amid concerns over First Amendment rights and the ability of Americans to protest Israel’s policies.

The resolution puts the House on record opposing the BDS movement and its efforts to target U.S. companies that do business with Israel.

The movement has grown in recent years, and Israel sees it as a threat. Supporters of Israel view it as an attempt to delegitimize the Jewish state.

“We must reject the blatant anti-Semitics injected throughout BDS,” said Rep. Lee Zeldin, R-N.Y., a sponsor of the measure.

The resolution has been pushed by AIPAC, the influential Israel lobby in Washington. J Street, a more liberal group in the progressive Jewish community, had opposed an earlier Senate version but supported the House’s approach.

To win over those in the House who had panned the Senate effort, the resolution beefed up First Amendment protections over the boycott.

While the Senate bill affirmed the legal authority of state and local governments to restrict contracts or take other actions against entities that boycott Israel, the House bill affirms the constitutional right of Americans to engage in “free speech, including the right to protest or criticize the policies of the United States or foreign governments.”

Evil at work: Arguing for BDS

Whereas the democratic, Jewish State of Israel is a key ally and strategic partner of the United States;

Whereas since Israel’s founding in 1948, Congress has repeatedly expressed our Nation’s unwavering commitment to the security of Israel as a Jewish and democratic state;

Whereas American policy has long sought to bring peace to the Middle East and recognized that both the Israeli and Palestinian people should be able to live in safe and sovereign states, free from fear and violence, with mutual recognition;

Whereas support for peace between the Israelis and Palestinians has long-standing bipartisan support in Congress;

Whereas it is the long-standing policy of the United States that a peaceful resolution to the Israeli-Palestinian conflict should come through direct negotiations between the Government of Israel and the Palestinian Authority, with the support of countries in the region and around the world;

Whereas it is a hallmark of American democracy for citizens to petition the United States Government in favor of or against United States foreign policy;

Whereas cooperation between Israel and the United States is of great importance, especially in the context of rising anti-Semitism, authoritarianism and security problems in Europe, the Middle East, and North Africa;

Whereas the Global Boycott, Divestment and Sanctions Movement (BDS Movement) targeting Israel is a campaign that does not favor a two-state solution and that seeks to exclude the State of Israel and the Israeli people from the economic, cultural, and academic life of the rest of the world;

Whereas the BDS Movement targets not only the Israeli government but also Israeli academic, cultural, and civil society institutions, as well as individual Israeli citizens of all political persuasions, religions, and ethnicities, and in some cases even Jews of other nationalities who support Israel;

Whereas the BDS Movement does not recognize, and many of its supporters explicitly deny, the right of the Jewish people to national self-determination;

Whereas university-based BDS efforts violate the core goals of the university and global cultural development, which thrive on free and open exchange and debate; and

Whereas the BDS Movement promotes principles of collective guilt, mass punishment, and group isolation, which are destructive of prospects for progress towards peace and a two-state solution: Now, therefore, be it

Resolved, That the House of Representatives—

(1) opposes the Global Boycott, Divestment, and Sanctions Movement (BDS Movement) targeting Israel, including efforts to target United States companies that are engaged in commercial activities that are legal under United States law, and all efforts to delegitimize the State of Israel;

(2) affirms that the Global Boycott, Divestment, and Sanctions Movement undermines the possibility for a negotiated solution to the Israeli-Palestinian conflict by demanding concessions of one party alone and encouraging the Palestinians to reject negotiations in favor of international pressure;

(3) urges Israelis and Palestinians to return to direct negotiations as the only way to achieve an end to the Israeli-Palestinian conflict;

(4) supports the full implementation of the United States-Israel Strategic Partnership Act of 2014 (Public Law 113–296; 128 Stat. 4075) and new efforts to enhance government-wide, coordinated United States-Israel scientific and technological cooperation in civilian areas, such as with respect to energy, water, agriculture, alternative fuel technology, civilian space technology, and security, in order to counter the effects of actions to boycott, divest from, or sanction Israel; and

(5) reaffirms its strong support for a negotiated solution to the Israeli-Palestinian conflict resulting in two states—a democratic Jewish State of Israel, and a viable, democratic Palestinian state—living side-by-side in peace, security, and mutual recognition.