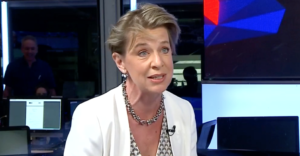 In the heated debate alongside former Israeli ambassador to France Daniel Shek, Hopkins stood by the claim, as explored in her new documentary ‘Homelands’, that it is the Muslims who are “forcing the Jews out of western Europe,” as well as “her own population.”

She went on to confirm a previous statement comparing African migrants to cockroaches, but recasted the remark claiming she was referring to their “enduring nature.”

“It is absolutely a fact,” she told the Spin Room’s Ami Kaufman. Adding that the reference was “specifically because we’re taught that the only animal that could survive a nuclear holocaust is a cockroach.”

“I was referring to the enduring nature of migrants across the Med and I don’t regret one word of that column,” she continued.

Hopkins is currently in Israel for the premiere of her documentary this week. On her visit she has expressed a strong love for the Jewish State and its leader, Prime Minister Benjamin Netanyahu.

However, when asked if she believed a two-state solution could be possible she responded, “never,” adding: “‘There will never be peace in Israel until you remove the people who don’t belong there.”