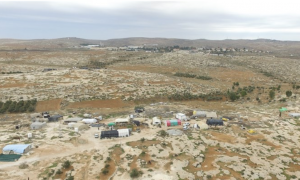 The UN’s main human rights body expressed concern on Tuesday over Israel’s expected demolition of a Bedouin hamlet in the West Bank, the structures of which Israel says were illegally built and pose a threat to security due to their proximity to a highway.

The Bedouin village of Khan al-Ahmar, outside the Kfar Adumim settlement, is set to be demolished at an unknown date after Israel’s Supreme Court approved the move in May. Israel agreed to resettle the residents in an area some 12 kilometers (seven miles) away.

Critics complain that it is nearly impossible to get a construction permit from Israel, and that the village’s demolition and the removal of its 180 or so residents is a ploy to clear the way for new Jewish settlements.

In a statement, a spokeswoman for the UN High Commissioner for Human Rights called on Israel to abandon the demolition plans and said the destruction of private property by an “occupying power” violated international law.

“We call on the Israeli authorities not to proceed with the demolition of (Khan al Ahmar), to respect the rights of residents to remain on their land and have their status regularized,” the spokeswoman, Liz Throssell, said.

The West Bank’s Arab Bedouin are a small, impoverished minority among the broader Palestinian population. Like many other Bedouin encampments, residents of Khan al-Ahmar live in corrugated shacks or tents, often without electricity or running water, and raise livestock.

The village is located in the 60 percent of the West Bank known as Area C, which remains under exclusive Israeli control and is home to dozens of Israeli settlements.

Israel captured the West Bank, Gaza Strip and east Jerusalem in the 1967 Six-Day War. As part of interim peace deals in the 1990s, the West Bank was carved up into autonomous and semi-autonomous Palestinian areas, known as Areas A and B, and Area C, which is home to some 400,000 Israeli settlers.

Palestinians argued that the land is occupied territory, while Israel argues that it is disputed land.

The Palestinians seek all of the territories captured by Israel in 1967 for a future independent state. They say that Area C, home to an estimated 150,000 to 200,000 Palestinians, is crucial to a future Palestine’s economic development.

J Street, a left-wing liberal group in the US that describes itself as “pro-Israel”, submitted a petition against the demolition signed by 7,000 people to the Israeli Embassy in Washington. It said the demolition would have far-reaching effects.

“Beyond the devastation it would create for Khan al-Ahmar’s residents, the demolition would also strike a major blow to prospects for a two-state solution and a peaceful future for Israelis and Palestinians,” it said.