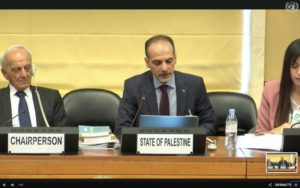 “Several NGO reports pointed out antisemitic and anti-Israel prejudice and incitement to hatred, especially in the [Palestinian] media and speeches of state officials. Can the state party [the PA] provide any explanation in this regard?” asked committee member Chinsung Chung of South Korea. She is the special rapporteur for the Palestinian Authority’s review by the committee. Its members paused to note the “historic” quality of the moment before tackling the more complex issues at hand.

Committee member Silva Albuquerque said he had been briefed by NGOs earlier in the day on examples of racism and antisemitism in the PA, particularly in its school books.

“Our convention obliges state parties to adopt immediate and effective measures, particularly in education, to combat racial discrimination and prejudice between different racial and ethnic groups, over jurisprudence,” he said.

Silva Albuquerque, another expert on the UN committee, asked for concrete examples of how the PA tackled antisemitism in its school textbooks. – UN TV Screenshot by UN Watch

Albuquerque asked the PA delegation in the room for specific examples of how it had tackled this problem. PA Foreign Ministry representative Ammar Hijazi, who led a delegation of over a dozen officials, spoke briefly at the end of the hearing.

The meeting will continue on Wednesday to explore issues of discrimination in Areas A and B of the West Bank and in Gaza.

Such accusations of hate speech are “regrettable,” Hizjazi said. “We do not discriminate against any of our citizens based on ethnicity and religion or sex. We are a state that is trying to find its path and still formulating its laws,” Hijazi said.

He accused the committee members of accepting at face value charges by NGOs that were “founded and funded to deny Palestinians their rights, their narrative and to spread untruths about them.” These organizations are dedicating to attacking the integrity of the UN, he added.

Just accepting that “Palestine is a state” is a problem for them, Hijazi said. Providing these “propaganda” organizations a podium only politicizes the committee’s work, he said.

Read the UN Watch Report here. <— A MUST READ

UN Watch Executive Director Hillel Neuer told The Jerusalem Post in response that it was unfortunate the Palestinians sought to evade responsibility. “They wanted to sign treaties and now they are being held to account,” Neuer said.

NGO Monitor President Prof. Gerald Steinberg said the hearing had set a “major precedent.” He added that: “Palestinians are being forced to deal with their own antisemitism, including in their textbooks. And, unlike the usual procedures in the Human Rights Council, members of this expert committee listened to the presentations from NGO Monitor, UN Watch and Impact-SE, and challenged the Palestinians.”

In advance of Tuesday hearing, the NGO groups UN Watch and NGO Monitor provided the committee with information about hate speech and antisemitism in the PA, including in its text books. Members of both groups also spoke at an off-camera event with the committee prior to the hearing.

UN Watch’s legal adviser Dina Rovner told the committee that the PA media “perpetuates antisemitic stereotypes such as that Jews are greedy, that they are part of a conspiracy to control the world, that they are baby killers, and that they poison Palestinians and steal their organs.

“The Palestinian media also glorifies and encourages martyrdom in the fight to liberate Palestine from the River to the Sea – meaning to eliminate Israel – and broadcasts songs and videos advocating to kill Jews and Israelis,” she said.

Rovner explained to the committee that the minority population in the Palestinian territories was very small, that Christians were a persecuted minority there and that there was no Jewish community living under PA control.

During the formal meeting with the Palestinian delegation later in the afternoon, committee member Bakari Sidiki Diaby asked: “Is there a Jewish minority in Palestine, and how is the Jewish community represented in the media? How are the other minorities represented?”

Diaby added that, “I failed to find any reference to any laws that protect human rights defenders in the country. Many people will be rising to defend causes and human rights, and to counter hate speech and racial discrimination. Do you have a legal framework enabling you to protect these people?” he asked.

For over two hours, committee members posed questions to the Palestinian delegation about areas of concern regarding its report.

Chung noted that the delegation had focused at least a portion of its report on Israeli actions against Palestinians and the issues relating to the Israeli “occupation” and settlement building.

These issues are known and debated elsewhere, she said. “The Israeli settlements are not only illegal under international law but also present an obstacle to the enjoyment of human rights by the whole population,” Chung said.

But the purpose of this committee is to focus on “human rights problems among the Palestinians themselves,” which the Palestinian government is responsible for correcting, she said.

Chung particularly asked about treatment of Druze and Circassians under the PA.

Committee members asked for better data on minorities in the Palestinian territories; application of the convention; and the process of creating and applying laws against racism and discrimination, particularly with regard to hate crimes.

They noted the lack of clear involvement of non-governmental groups in the governmental report and the submission of only five independent reports to the committee, of which four came from outside the Palestinian territories.

They asked what steps if any had been taken to reduce the number of Palestinian refugees. Questions were also posed about human trafficking and discrimination against women, including with regard to marriage, domestic violence and property laws.

The PA delegation is slated to respond to those questions on Wednesday.

The UN does not recognizes Palestine as a member state. Since its UN designation in 2012 as a non-member state, however, the PA has had the ability to sign onto treaties and conventions, such as the one on racial discrimination. It has already signed onto seven out of nine UN human rights treaties that require a review of its human rights record, just as if it was any member state.

The PA’s record on its treatment of women was already reviewed in July 2018, and in January 2020, the UN’s Committee on the Rights of the Child will similarly review the PA’s record.