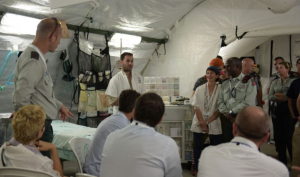 Regardless that IDF field hospitals have been one of the first on the scene of most major disasters, the UN’s World Health Organization has officially rated IDF field hospitals as a “Type 3” medical facility, the only one to have attained that classification.

The IDF field hospital is routinely dispatched to disaster zones around the world to provide much-needed assistance and treatment to the victims of tsunamis, earthquakes and other calamities.

The UN’s World Health Organization (WHO) has now made it official that the IDF field hospital is a “Type 3” medical facility, the only one to have attained that classification.

“We’re going to recommend the director-general verifies [Israel’s team] as a Type 1, Type 2, and also Type 3 and multiple different types of specialty cells,” said WHO delegation head Dr. Ian Norton at a ceremony outside Tel Aviv. “We haven’t had that ever before.”

The commander of the field hospital, Lt. Col. (res.) Dr. Ofer Merin, called the IDF’s aid missions a “national treasure,” and recognizing the field hospital as a “Type 3” facility will open new doors to Israeli teams ready and willing to provide critical assistance.

Members of the IDF Medical Corps will receive special WHO patches when the world body confirms the new designation at the end of the month.

The IDF has sent thousands of experts in the fields of search & rescue and medicine to countries all over the world to assist in times of disaster.