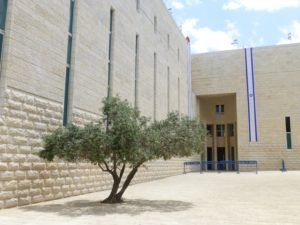 However, it turns out that only recently has UNTSO issued a tender for the demolition and reconstruction of one of the buildings built during the British Mandate in the Armon Hanatziv compound – in violation of the law and without a building permit from the Jerusalem Municipality.

As part of the preliminary legal process, in which the Regavim Land of Israel movement requested a court order to stop the work, the State admitted that the construction work was done without authorization and is illegal. An updated statement submitted by the State to the High Court in September stated that “the State does not waive its legal responsibility and authority regarding the compound in Armon Hanatziv.”

The State added that because of the UNs diplomatic immunity, the Foreign Ministry is working to solve the issue through diplomatic channels, and that “action in this track will bring about the desired result in the quickest and most efficient way.”

The State argued that there is no basis for issuing a court order to stop the illegal work, since Prime Minister Netanyahu concluded with UN Secretary-General António Guterres during his visit to Israel at the end of August that both sides would work to resolve the issue of construction as part of “a practical dialogue that will ensure that current and future construction will be carried out in accordance with the interests and purposes underlying the relevant laws (planning and building laws), while respecting the UN’s immunity.”

On the basis of the State’s declaration, the High Court decided not to issue an order to stop the work, and returned the case to the Jerusalem District Court, which tomorrow (Wednesday) is expected to hear it for the first time.

But declarations are one thing and deeds quite another. It turns out that even as the State declared a “practical dialogue”, the United Nations issued a contractor’s tender for the demolition of a two-story building in the Armon Hanatziv compound, in order to build a new building there, even though it had not received any legal permit to carry out the work.

The tender document, which was leaked to Regavim and bears the date of September 13, was sent to the District Court on the eve of the hearing, demanding a renewed halt to the continuation of the work. “In complete contradiction to the State’s announcement that it is acting in cooperation with the UN to regulate the existing and future construction in the compound,” noted attorneys Avi Segal and Yael Sinmon, “the United Nations or those acting on its behalf continues to do what it pleases in a site of historic importance and builds illegally, knowing that the enforcement authorities will not take any action whatsoever to stop the illegal activities.”

To read the urgent announcement to the court click here.

In addition to the illegal construction work, research conducted by Regavim shows that the UN headquarters in Armon Hanatziv allegedly invaded 30 dunams of state land without a permit, and in 1967 the UN allocated some 40 dunams to the UN, but over the years the UN expanded the compound by 30 dunams.Following the petition, the court is expected to discuss the issue of the UN trespass.