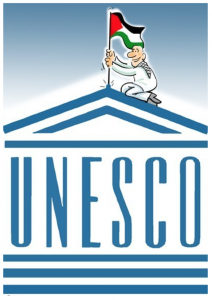 In what could be a crucial development, the head of UNESCO (United Nations Education, Scientific and Cultural Organization) has issued a statement roundly condemning the Palestinian Authority bid to claim the Kotel (Western Wall) as a Muslim site. Announcing that she had “started broad consultations so as to encourage UNESCO Member States to pursue constructive dialogue in accordance with UNESCO’s mandate” following announcement of the bid – which is being backed by several Arab member-states of UNESCO, the statement continued:

[Bokova] deplores the recent proposals under discussion by the UNESCO Executive Board that could be seen to alter the status of the Old City of Jerusalem and its Walls, inscribed on UNESCO’s World Heritage list  and that could further incite tensions.

The Director-General appeals to the UNESCO Executive Board to take decisions that do not further inflame tensions on the ground and that encourage respect for the sanctity of the Holy Sites.

The protection of cultural heritage should not be taken hostage, as this undermines UNESCO’s mandate and efforts.

“We all have responsibility to UNESCO’s mandate, to take decisions that promote dialogue, tolerance and peace,” Bokova was quoted as saying. “This is especially important for young people, who should be nurtured and educated for peace.”

She further urged “all parties to ensure that cultural heritage, including religious, is preserved and accessible to all and to resume dialogue in the spirit of mutual understanding.”

The attempt to claim the Kotel, or Western Wall, as “part of Al Aqsa Mosque” has already drawn strong condemnations from Israeli officials and Diaspora Jewish leaders alike.