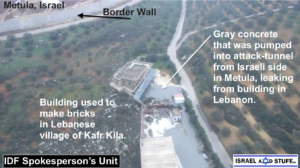 Since “Operation Northern Shield” was launched in the beginning of the month, Israel’s Defense Forces (IDF) has exposed five tunnels dug by Hezbollah crossing from Lebanon into Israeli territory.

So far UNIFIL has confirmed the existence of four tunnels, three of them violating the border demarcation known as the “blue line”.

“In the course of the ongoing investigation into the presence of tunnels along the Blue Line, UNIFIL together with the Lebanese Armed Forces (LAF) surveyed the premises of an old concrete factory in the southern part of (Kafr Kila), after UNIFIL had observed liquified cement flowing out from the building within this facility,” a statement from UNIFIL said on Saturday.

“The liquid overflowing on the Lebanese side had been injected by the Israel Defense Forces (IDF) through a shaft drilled on their end of a tunnel that UNIFIL had previously independently confirmed to be crossing the Blue Line in the same general area. Based on this observation, UNIFIL can confirm that the old concrete factory in (the village) has an opening to the tunnel, which is crossing the Blue Line,” the statement added.

Amid the blocking operation, the Israeli army added that it noticed the fluids used to seal the tunnels had seeped out of the civilian structures in the Lebanese origin town and had flooded a number of the streets in the surrounding area. Video footage published by IDF illustrated the cement flow.

After each exposure, Israel repeatedly reaffirms that it holds the Lebanese government accountable for “the digging of its tunnels and its consequences,” adding that it will continue to work with regional council heads and local residents where necessary.

Israel has long warned that it believes Hezbollah intends to conduct cross-border raids in any future conflict with Israel in the form of military infiltration and kidnappings, as part of the militants strategy to “take the Galilee.”

During a cabinet tour of Israel’s northern border on Tuesday, Israel’s Prime Minister Benjamin Netanyahu said that the “operation is almost entirely behind us.” He said that Hezbollah had “put a lot into it” and that “we ruined it for them.”

“The uncovering and destruction of the tunnels has brought significant harm to Hezbollah’s ability to realize its plans,” the IDF said in a statement on Thursday, echoing the premiers remarks.

“This fact points to Hezbollah’s use of civilian structures in the heart of built-up areas in southern Lebanon, endangering its citizens as human shields in grave violation of Resolution 1701,” the army said, referring to the UN measure ending the 2006 Lebanon War.