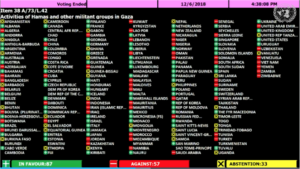 Typically, such resolutions require a simple majority to pass. But the General Assembly decided that a two-thirds majority would be required for it to condemn a group that most of the world considers a terrorist organization. Simple majorities are the order of the day for the regular anti-Israel resolutions brought before the chamber. In the above video, US Ambassador Nikki Haley decried this clear example of bias.

Even so, the resolution received a “yes” vote from 87 nations, while 57 voted against and 32 abstained.

This, said Israel Prime Minister Benjamin Netanyahu, was a victory, considering that such a firm majority of the international community was willing to stand up and call out a group that exists for the sole purpose of destroying Israel.

While it did not achieve a two-thirds majority, this is the first time that a majority of countries have voted against Hamas and I commend each of the 87 countries that took a principled stand against Hamas

Also celebrating were Israel’s supposed peace partners in the Palestinian Authority, which saw the outcome as yet another censure of the Jewish state, as well as Hamas, which called the failure to pass the resolution a slap in the face of US President Donald Trump and his pro-Israel policies.