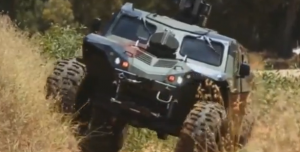 The US Army chose Israel’s Iron Fist Active Protection System for its armored personnel carriers, designed to detect and intercept a range of incoming missiles and rocket-propelled grenades for light-to-medium-weight APCs.

The US Army has chosen Israel Military Industries to provide it with an active protection system for its armored personnel carriers in a dramatic development for Israel’s defense export market.

The system will be installed on APC rooftops.

It will use a combination of a radar and an electro-optical sensor to detect and intercept a range of incoming missiles and rocket-propelled grenades, IMI corporate vice president of marketing Avinoam Zafir told The Jerusalem Post on Monday.

After studying and testing it, the US Army chose IMI’s Iron Fist Light Configuration, designed for light- to medium-weight APCs.

When the vehicles come under guided missile fire, the system can jam the threats that have advanced guidance systems and cause them to fall harmlessly to the ground. “Dumb” weapons, such as RPGs, are destroyed using interceptors. Small warheads are fired and explode near the incoming threat, destroying it with a shock wave, Zafir explained.

The interception occurs at a safe distance from the defended platform, he added. The system works in a “very close-range scenario in both open field and urban environments,” an IMI statement said.

The system’s low weight, lack of shock after it fires its interceptor, and “attractive price” were all factors in the US army’s decision to select it, according to Zafir.

He hailed its “ability to defend against rockets, RPGs, anti-tank missiles from the entire spectrum, and even against recoilless gun munitions.

“A boxer can put up both hands to absorb blows – this is passive defense. He can also strike out with a fist and hit before he is punched. This is active defense, and it is what our system offers,” Zafir said.

The system’s computer enables it to decide when to fire the interceptor, or to jam the threat, within a “split second,” he said. In cases of physical interception, “We create a shock wave around the threat, and it falls as metal pieces to the ground,” he added.

Iron Fist’s sensors allow personnel inside an APC to see other threats around them, such as gunmen in the vicinity.

“We believe that the American army will begin acquisition and supply within two years,” Zafir said.

“We are convinced there is a very big potential here.”