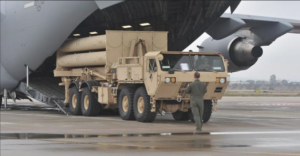 As part of a joint drill involving more than 200 Israeli and American troops, the Terminal High Altitude Area Defense (THAAD) system was deployed at the Nevatim Airbase, and will soon be transported to an undisclosed location in southern Israel.

The deployment, which began in recent days, was intended to test the US military’s ability to rapidly deploy such weapons around the world, said a spokeswoman for United States European Command.

Citing security reasons, she declined to say how long it took to move the THAAD system, which is built by Lockheed Martin and Raytheon, from its home base at Fort Bliss, Texas to Israel.

The move comes amid increased tensions between Israel and Iran over Israel’s bombing campaign in Syria and comments in which Iran’s foreign minister said he could not rule out the possibility of military conflict between the two countries.

The US military said the decision to rapidly move the THAAD system to Israel was intended “as a demonstration of the United States’ continued commitment to Israel’s regional security.”

“THAAD is the most advanced integrated air and missile defense system in the world, and this deployment readiness exercise demonstrates that US forces are agile and can respond quickly and unpredictably to any threat, anywhere, at any time,” the US European Command said.

As part of the deployment, US troops will be stationed in various locations in Europe, the United States and in Israel to operate the system in close cooperation with the Israel Defense Forces, it said.Israeli military spokesman Lt. Col. Jonathan Conricus said the deployment differs from previous simulated US-Israel joint military exercises and involves tactical coordination on the ground.

THAAD battery along with US soldiers arrives in Israel for the first time – Photo: IDF Spokesperson’s Unit

“The advantage from the Israeli point of view is that we have an opportunity to integrate it into our systems and simulate different scenarios,” he said.

Prime Minister Benjamin Netanyahu hailed the cooperation between the US and the Jewish state.

“Deployment of the American anti-missile system in Israel is additional testimony to the commitment of the US to the security of Israel,” he said.

“The American THAAD system is considered one of the most advanced systems in the world, and together with our defensive systems we are even stronger in order to deal with near and distant threats from throughout the Middle East. The bond between the US and Israel has never been stronger. I welcome this joint exercise,” Netanyahu said.