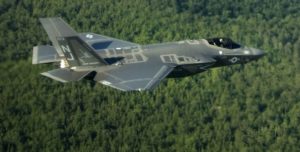 Washington’s move follows repeated warnings both from the United States and NATO allies to Ankara that buying the Russian system alongside the Lockheed Martin-produced jets would threaten the security of the F-35s by learning how to spot and track it.

Israel, which also has fragile relations with Turkey, currently has 14 F-35i Adir jets and is expected to receive a total of 50 planes to make two full squadrons by 2024.

According to foreign reports, Israel has already quietly tested ways to defeat the advanced Russian air defense system, participating in several joint drills with the Greek Air Force over the island of Crete where one system is stationed. The drills have reportedly allowed Israeli warplanes to gather data on how the advanced system may be blinded or fooled.

But there are fears that the radar on the S-400 systems bought by Turkey, which has entered into a sort of alliance with Russia and has been in close cooperation with Iran, could learn the weak spots in the jet and make it less able to evade Russian weapons in the future.

The top uniformed officer in NATO and the head of American forces in Europe, General Curtis Scaparrotti warned in March during testimony to the Senate Armed Services Committee that Ankara’s purchase of the S-400 presents a problem for not only the F-35 but to all American aircraft.

“My best military advice would be that we don’t then follow through with the F-35: flying it or working with an ally that is working with Russian systems, particularly air defense systems, with one of our most advanced technological capabilities,” Scaparrotti was quoted by Defense News as saying.

Built by Lockheed Martin, the jets have an extremely low radar signature allowing them to operate undetected deep inside enemy territory as well as to evade advanced missile defense systems like the S-300 and S-400.

The already fragile relations between Israel and Turkey have been increasingly strained in recent months as Turkish President Tayyip Erdogan, a vocal critic of Israel’s policy toward the Palestinians, has intensified his rhetoric.

Israeli officials have voiced concern over Turkey’s purchasing of the jets, with one senior defense official quoted by Haaretz in August as saying that Israel would like to be the only country in the Middle East with the F-35 in order to keep its qualitative military edge and out of fears that the jet’s capabilities would be leaked to enemy countries.

Ceng Sagnic from the Moshe Dayan Center in Tel Aviv told The Jerusalem Post that while Moscow might be “hesitant” to share the knowledge of the jet which might be gained by its S-400, it couldn’t be ruled out.

“Moscow would definitely be hesitant to share the military “secrets” it has obtained with a third party. But in the event of a major dispute in the region or a potentially expanded Moscow-Tehran alliance, transfer of knowledge on US weapon systems to Tehran can well be a topic of discussion,” he said.

According to Sagnic, it is impossible to estimate the extent of Ankara’s “cloudy relations” with Moscow.

“The presence of both F-35s and S-400s can also come with a similar outcome itself. If Turkey had purchased F-35s from the US and S-400s from Russia, the situation would partially resemble Greece – where the coincidental presence of S-300 systems allowed, according to foreign reports, NATO and Israel to carefully study these weapons,” he said, adding that “in the case of Turkey, although it would stay a member of NATO, the future extent of its relations with Russia cannot be estimated and Ankara could well remain pressured by Moscow to allow such studies. Given that Turkey is and will be a country of crises – and therefore is mostly prone to Russian pressure – the possibility increases even further.”

Reported on Israel’s TV News, Israel’s F-35 Adir was photographed flying over Beirut completely unnoticed. There must have been two… someone took this picture. – Screenshot: Israel’s TV NEWS

Israel became the first air force outside the United States to declare Initial Operational Capability (IOC) of the jet in 2017. Last year, IAF chief Maj.-Gen. Amikam Norkin announced that Israel has struck targets in the Middle East with the F-35 Adir jet twice, making the Jewish state the first country to use the stealth fighter in a combat role in the region.

According to Sagnic, “Turkey must be seriously thinking that Israel may be behind the cancellation of the F-35 deal in order to preserve its air superiority. However, for the domestic politics, Ankara needs a “usual suspect” to blame, as blaming the US cannot be enough to explain the disruption in one the biggest weapons agreement Turkey has signed.”

As a Level-3 partner in the multinational F-35 program, Turkey invested over $1 billion on the jet, with several local companies producing components for the aircraft including fuselages and cockpit screens such as Alp Aviation, AYESAS, Kale Aviation, Kale Pratt & Whitney and Turkish Aerospace Industries.

Ankara took delivery of its first F-35 in June at a ceremony in Texas and the country plans to purchase 100 stealth jets in the coming years. Turkish pilots have already been learning to fly the jet training alongside US pilots at Luke Air Force Base, Arizona. Ankara is holding onto hope that the two more jets expected to be handed over this month will actually be delivered.