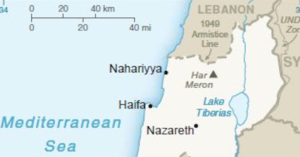 – Including: The case for the State of Israel’s legal rights to the Golan Heights under International Law

US Envoy for Middle East negotiations Jason Greenblatt released a map of Israel, including the Golan Heights, on social media on Tuesday.

The new map, which includes the Golan Heights as a part of Israel, was added to the US international maps system, according to the tweet.

Welcome to the newest addition of our international maps system after @POTUS issued a proclamation recognizing Israeli sovereignty over the Golan Heights pic.twitter.com/1D0GTdwtix

“Welcome to the newest addition of our international maps system,” wrote Greenblatt, citing the recent decision by US President Donald Trump to recognize the former Syrian land as a part of Israel.

US President Donald Trump recognized Israeli sovereignty over the Golan Heights in March, when he tweeted that it is time the US does so.

A few days later Trump signed an official document with Prime Minister Benjamin Netanyahu at his side.

The American decision is not shared by the EU or Russia, who view the Golan Heights as occupied Syrian land

Even though politics has driven the United Nations and its member-states into rejecting recognition of Israel’s sovereignty over the Golan Heights based on past UNGA and UNSC resolutions, those decisions are not set in International Law.

With the British changing the spirit and character of the Mandate by ‘giving’ 77% to the Hashemite bedouins to form the future Kingdom of Jordan, that action was ratified by the League of Nations, rendering the UK’s alterations as legal under international law.

When the United Nations was formed, it accepted all previous mandates, treaties and agreed articles from the League of Nations and stationed them into international law.

Unfortunately, when the Golan Heights was given to the French Mandate in 1919 in a bilateral deal, and even though that action went undisputed, it was never ratified by legally amending the 1922 Mandate, as illustrated below by Philip Shukry Khoury’s Syria and the French Mandate. The Politics of Arab Nationalism, 1920-1945. Princeton University Press, Princeton 1987.

The Golan Heights, being ‘given’ to the French, was an illegal transaction under Article 5 of the Mandate for Palestine …even if it went unchallenged.

When the Syrians lost the Golan Heights in June 1967 during the 6 Day War, their 21 year reign [since 1946] ended. It took 52 years under Israeli sovereignty until a world leader, U.S. President Donald Trump, publicly stood against ‘world opinion’ and formally recognized Israel’s right under the law.