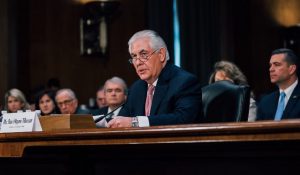 In the report, the department claimed that terrorism against Israel was fueled not by anti-Semitic incitement in the Arab sector, but Jewish construction in Judea and Samaria and “a lack of hope” among Palestinian Authority residents.

Incitement in the Palestinian Authority was only indirectly alluded to, with a passing reference to what the report calls “the perception” that Israel is seeking to alter the status quo on the Temple Mount.

“Continued drivers of violence included a lack of hope in achieving Palestinian statehood, Israeli settlement construction in the West Bank, settler violence against Palestinians in the West Bank, the perception that the Israeli government was changing the status quo on the Haram Al Sharif/Temple Mount, and IDF tactics that the Palestinians considered overly aggressive,” the report claims.

Immediately after this paragraph, the report praises the PA for having “taken significant steps during President Abbas’ tenure (2005 to date) to ensure that official institutions in the West Bank under its control do not create or disseminate content that incites violence.”

The report acknowledges that “some PA leaders have made provocative and inflammatory comments,” but claims that the “PA has made progress in reducing official rhetoric that could be considered incitement to violence.”

Evidence of the PA’s improved behavior, the report claims, is the alleged rarity of open calls for violence against Jews and explicit denials of Israel’s right to exist.

“Explicit calls for violence against Israelis, direct exhortations against Jews, and categorical denials by the PA of the possibility of peace with Israel are rare and the leadership does not generally tolerate it.”

No mention is made in the report of funding by the PA and the ruling Fatah party of terrorists and their families, who receive generous stipends if relatives are killed during or jailed after terror attacks against Israeli Jews.

To hide the lopsided ratio of acts, the report discusses even minor acts of vandalism by Jews, while ignoring the thousands of stone-throwing incidents, firebombings, and other attacks by Arabs to only list fatal terror attacks.

While the report was based in part on work done during the Obama administration, according to the Conservative Review, much of the anti-Israel rhetoric found in the report was not present in similar Obama-era reports produced by the State Department, suggesting it was added by department officials after Secretary of State Rex Tillerson was sworn in.

The report, Roskam wrote, undermines “the prospect for Israeli-Palestinian peace and wrongly blame[s] Israel for Palestinian terrorism against Israeli civilians.”

“At the highest level,” Roskam noted, “the Palestinian Authority leadership directly incites, rewards, and in some cases, carries out terrorist attacks against innocent Israelis.” Roskam added that the root cause of terrorism in the area was not Israel, but the PA leadership.

“The State Department report includes multiple findings that are both inaccurate and harmful to combating Palestinian terrorism. This report wrongly insinuates Israeli security measures on the Temple Mount and a stalled peace process as key forces behind terrorism. Most egregiously, it portrays the PA as innocent peacemakers far removed [from] being the source of terrorist activity.”

Incitement to kill Jews on Facebook has a very real response.

Congressman Roskam went on to note the full extent of Arab terrorism since September 2015, which included 1818 stabbing attacks, 159 shooting attacks, “60 vehicular ramming attacks,” which combined “killed over 50 Israelis and injured nearly 1,000. President Abbas, who deemed this terror wave a ‘peaceful uprising’, was a key supporter of these heinous attacks.”

On Monday, the Zionist Organization of America issued its own response to the State Department report, calling the document “bigoted, biased, anti-Semitic, Israel-hating,” and “error-ridden”.

The ZOA lambasted Secretary Tillerson over the report, and demanded his resignation. (<— Recommend Reading, IsraelandStuff.com)

“This Tillerson State Department Report blames Israel for Palestinian Arab terrorist attacks on innocent Jews and Americans, ignores and whitewashes the Palestinian Authority’s (PA) ‘pay to slay’ payments to Arabs to murder Jews, and among other travesties – contradicts both President Trump’s insightful Riyadh speech, and Ambassador Haley’s outstanding work at the United Nations.”