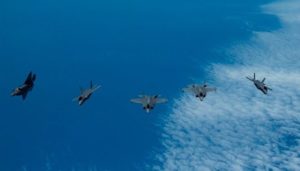 The one-day defensive counter air exercise included both friendly and “enemy” aircraft from the three countries, and included use of both active and passive defense operations.

The “enemy” aircraft in the exercise included a number of different fighter aircraft, while the F-35 fighters played the role of friendly, or “blue”, aircraft.

“We build capacity with our strategic partners to harness our air component’s capabilities and skills,” said Lt. Gen. Joseph T. Guastella, U.S. Air Forces Central Command commander. “The transatlantic strategic relationship between the U.S. and our allies and partners has been forged over the past seven decades, and is built on a foundation of shared values, experience and vision.”

The American F-35As which participated in the exercise are stationed at Al Dhafra Air Base in the UAE, while the the Royal Air Force F-35Bs flew from RAF Akrotiri in Cyprus. The Israeli Air Force F-35Is flew from Nevatim Air Base.

“Tri-Lightning was an exercise which had been planned for months, and it provided an outstanding opportunity for the squadron to operate and learn from our fellow F-35 community,” said U.K. Wing Commander John Butcher, Squadron 617 commanding officer. “In addition it allowed us to share and gain valuable experience that we will be able to exploit during future training and potentially operational deployments, whether embedded on the Queen Elizabeth or from overseas airbases.”