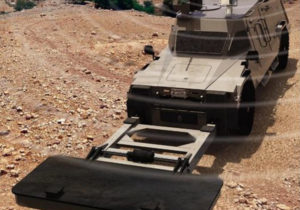 Since the 2003 invasion of Iraq, over 2,000 American troops have lost their lives to improvised explosive devices. This new system locates, identifies, and can destroy them before they injure, or worse.

The system can identify, locate and destroy improvised explosive devices and mines before troops even reach them.

According to project manager Reuven Y., the system, which is not yet operational, “is a new concept that doesn’t exist anywhere else in the world. It is a breakthrough technology against IEDs.”

Primarily intended for patrols during routine security missions on Israel’s borders, CIMS created by Elta, one of IAI’s subsidiaries, can detect both surface and underground IEDs, mines and roadside bombs.

“The CIMS suite was designed under the premise that no one sensor can provide the adequate probability of detection and low false-alarm rate required by today’s operational needs,” read a 2014 statement by IAI when the system was first unveiled.

It can be operated day or night and in any weather condition and environment.

A large, rectangular multi-sensor system is placed directly in front of armored vehicles allowing it to search and destroy the IED.

Reuven told The Jerusalem Post that CIMS is a fully automated system that “when it detects an IED it automatically informs the troops making it so that a soldier does not need to exit the vehicle.”

According to IAI, CIMS has a 270° radius and when an IED or mine is identified, the system alerts soldiers with warning sounds and indicators on a screen inside the vehicle, which displays its findings.

The system also includes a firing position from where troops can shoot at the explosive device to destroy it without having to leave the safety of their vehicle.

The system’s sensors can be placed on any vehicle making it easier for customers. Reuven said the IAI plans to sell the system to the IDF as well as other armies and other governmental security agencies around the world.

With minimal training required – just two-three hours, according to Reuven – the two-pronged approach to IED and mine detection allows for more flexibility and while the underground MIDS system requires the vehicle to advance at 10 kph, the above-ground detection system can be operated while moving at twice that speed.

While IEDs and mines are not new to the battlefield, the use of these devices has become a matter of concern for modern armies both in regular and asymmetric warfare and over 2,000 US soldiers lost their lives to IEDs and roadside bombs since the invasion of Iraq in 2003.

In March, IDF troops defused two explosive charges found near the Gaza border. The army said the charges, which had been laid in an off-limits area in the northern Gaza Strip, were planted in order to harm IDF troops.

No troops were harmed.