Video of Clinton: Peres, one of the world’s visionaries, always lives in the future

Bill Clinton, ‘To preserve Israel’s character as a Jewish & democratic state, and that no matter how many settlers put down roots in the West Bank, the Palestinian birth rate outpaced that of the Jews, so, Israel had a fundamental question to deal with.’

President Shimon Peres’ 90th birthday celebrations kicked off Monday evening at the Peres Academic Center in Rehovot with a speech by former US President Bill Clinton. 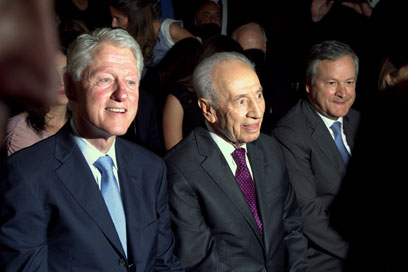 Following his address, Clinton said he did not see an alternative to a Palestinian state. The former American leader said an alternative was suggested to preserve Israel’s character as a Jewish and democratic state, and that no matter how many settlers put down roots in the West Bank, the Palestinian birth rate outpaced that of the Jews, so he believed Israel had a fundamental question to deal with.

Clinton said during his speech that he always felt at home in Israel and called Peres one of the world’s greatest visionaries, who always lives in the future rather than in the past. The former American president said the worst thing that happened during his term was the assassination Yitzhak Rabin, adding that not a week goes by that he does not think of the slain Israeli prime minister and burden placed on Peres’ shoulders as a result.

Clinton, who spoke before Israeli ministers, Knesset members and other dignitaries, told the Academic Center’s directors he would donate the money from the lecture to a scholarship fund for the institution’s students.

Peres, who delivered a short speech before Clinton, said the words “Shalom Chaver (goodbye friend),” spoken by the former American president after the assassination of Rabin, were still resonating in the hearts of the Israeli people.

The Israeli president said Clinton was a combination of a brilliant mind and a compassionate heart.

Earlier Monday, a more intimate, emotional gathering was held at the President’s Residence in Jerusalem. Singer-actress Barbra Streisand who is visiting Israel, met with Peres and with 21 children aged 3-18 with life-threatening illnesses, who came via Israel’s Make a Wish foundation.

For the children, who spend their days in a struggle to survive, meeting Streisand was one of their wishes and an escape from the realities of dealing with their illnesses. Streisand hugged the children and was visibly moved by their stories. One of the girls, Coral Veder, 16, a cancer patient, performed Streisand’s song, People.

The main birthday celebration is to be held Tuesday. Scheduled to participate in the birthday happening, in addition to the general Presidential Conference itself, are over 5,000 guests from 20 countries, including Streisand, Eyal Golan, Shlomo Artzi, four Nobel Prize winners, six presidents, and 20 Emmy, Grammy and Oscar winners. The events will be covered by 500 news/media outlet teams.