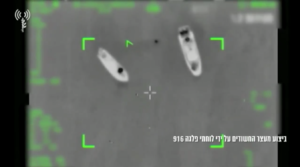 Two Palestinian vessels entered the forbidden area in the southern Gaza Strip on May 11, in violation of the security regulations and the armistice directives. The navy seized the vessels and the four suspects on them were transferred to interrogation of security forces.

The Shin Bet investigation revealed that the suspects were on their way from the Gaza Strip to the Sinai coast. From Egypt they intended to smuggle 24 barrels of fiberglass into the Strip, used by Hamas to manufacture missiles.

The suspects were accused of being associated with and attempting to aid Hamas; planning to carry our terror related killings; and aiding terror organizations.

“We set clear boundaries in the maritime sphere of the Gaza Strip,” Colonel Yuval Ayalon, Commander of the Southern Marine Division said.

“Borders that on the one hand allow fishermen to make a living, while at the same time attempt to destroy the attempts of terror organizations that threaten to harm Israel by sea. Dedicated and professional soldiers and commanders are working day and night to maintain Israel’s security in its maritime borders, and so did the fighters of Division 916, who combined with the authorities and intelligence services, thwart a dangerous smuggling attempt into the Gaza Strip.”

The joint effort of the IDF’s naval arm with other unit’s within the IDF and other security forces hurt Hamas’s capabilities, the IDF said, and is part of a long-term strategy of preventing terror activity and defending the citizens of the State of Israel.