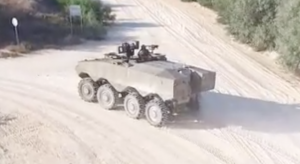 The IDF’s Eitan high speed APC will enable rapid deployment of forces to critical areas and will also be equipped with the Trophy active protection system, that intercepts RPGs and neutralizes anti-tank missile threats.

The Defense Ministry’s Tank Administration announced that it had built the first prototype of the the APC, dubbed Eitan, after completing the development stage.

The development process was informed by “lessons learned from Operation Protective Edge” against Hamas in Gaza, in 2014, the Ministry added.

The eight by eight wheel vehicle will be powered by a 750 horsepower engine, and will have an active protection system to intercept RPG and anti-tank missile threats.

It will be able to reach speeds of up to 90 kilometers an hour, and ferry infantry soldiers from one battle sector to another, while traveling along roads without the need for military trailer services.

It can also travel through difficult terrain, according to the Defense Ministry.

Fleets of Eitan APCs will join the Namer, the most heavily fortified APC in the world, enabling the IDF to gradually phase out the thousands of 1970s-era IDF M113 APCs, which proved to be highly vulnerable to armor-piercing projectiles in Gaza.

Brig.-Gen. Baruch Matzliah, commander of the Tank Administration, told reporters on a conference call that the Eitan is a multi-purpose fighting vehicle, which will have a remote controlled gun and missile launcher that can be operated without crews leaving the vehicle.

“This does not replace the Namer. It travels quickly on roads between sectors. It will work together with the Namer, allowing us to engage faster,” he said.

The Eitan will be less fortified than the Namer but its faster speeds mean the IDF will be able to move ground forces between north and south, at much higher speeds. At the same time, Baruch said, its conventional armor and Trophy active protection system will keep the vehicle safe from shoulder-fired missile threats.

The Tank Administration and the IDF Ground Forces began a series of tests in recent days involving the Eitan prototype.

“The Eitan will be the most advanced and fortified wheeled fighting vehicle in the world,” the Defense Ministry said in a statement.”

The Eitan will turn into a family of APCs, which will include a vehicle for transporting 12 combat soldiers while being able to conduct strikes on the battlefield using a roof-mounted gun and missiles.