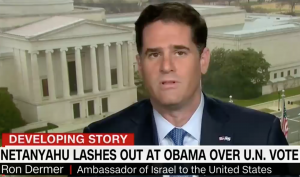 According to Dermer, not only did the U.S. not stand by Israel’s side during the vote, it “was behind this ganging up on Israel at the UN.”

Dermer said it was “a sad day and a shameful chapter in U.S.-Israeli relations.”

The United States abstained in the UN Security Council vote, paving its way for adoption with the support of the other 14 members.