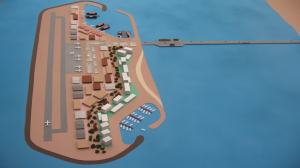 This is the latest in a growing number of ideas for addressing the Palestinian issue that have emerged from ministers and Knesset members in recent weeks coinciding with the change of government in Washington.

Katz, who also holds the Intelligence and Atomic Energy portfolios, said that in light of the “complicated” regional and global reality, Israel should initiate a widespread program that would include the following:

Building an artificial island off the coast of Gaza that would be linked by a bridge to Gaza and give the Palestinians an outlet to the world without endangering Israeli security. The island would include a port and both desalination and power plants that would serve the Gaza Strip.

The linking up of the country’s rail lines with Jordan, which would serve as a land port that could be used by Sunni states in the East to transport their goods to Haifa, through the Jezreel Valley. The Palestinian Authority, according to this plan, could also be hooked up to this as well, something that could have a significant economic impact.

The establishment of a “Greater Jerusalem” metropolitan area – similar to what exists in London and Paris – through expanding the capital’s borders to strengthen the Jewish majority by extending Israeli sovereignty to settlements in close proximity to Jerusalem, such as Ma’aleh Adumim, Givat Ze’ev, Gush Etzion and Beitar Illit. These areas would retain their municipal independence, but be a part of Greater Jerusalem.

A similar municipal authority would be established for the Arab Jerusalem neighborhoods beyond the security fence, which today are cut off from all Jerusalem municipal services.

Katz’s plan also calls for clarifying Israel’s construction policies beyond the Green Line to the new US administration that would allow for building throughout Jerusalem, and would also allow for construction on state land within the municipal boundaries of the settlements in Judea and Samaria.

“This plan strengthens Israel’s position and improves the situation in the region and does not preclude the possibility of negotiations or arrangements in the future,” Katz said. He made clear that he does oppose Bayit Yehudi head Naftali Bennett’s plan of extending Israeli law to Area C, which would necessitate the granting of citizenship to the 150,000 Palestinians who live there.