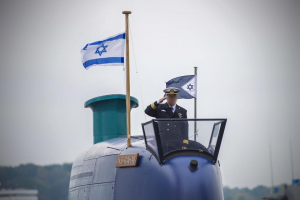 The Israel Navy’s fifth Dolphin submarine, and second new-generation AIP (air independent propulsion) platform has left its German manufacturing center for a 3000 mile journey to its home base at Haifa naval base, a senior naval source said Thursday.

The INS Rahav is carrying some 50 personnel, and “minimal weapons needed to protect itself,” before its arrival in Israel next month.

After its arrival, Israeli systems will be installed on board.

“We expect the submarine to be fully operational in a number of months,” the naval officer said.

AIP submarines can remain submerged for significantly longer periods of time than conventional platforms, and having two such submarines means that Israel has “doubled its covert capabilities,” the source said.

The submarine will stop at the site of where the INS Dakar sunk to the ocean floor in 1968 for a memorial ceremony, before continuing in its journey to Haifa.

The INS Rahav, like the INS Tanin, can use AIP fuel cells to supplement its diesel-electric engines, and does not have to surface often to recharge its batteries.

The new submarines will bring with them many unique capabilities, such as lengthy intelligence gathering.

Speaking in July 2014,Lt.-Cmdr. Y., who was commander of the navy’s submarine school until his retirement last year, told The Jerusalem Post: “Submarines bring a level of intelligence to Israel that cannot be achieved by other units.”

“Drones that fly in the air can be shot down,” he said.

“But a submarine can stay in enemy territory for weeks, and no one knows it’s there. It can lurk off coastal regions without any problem at all. The level of intelligence this brings is not heard about by the public. All of our operations build on past operations.”

A senior IDF source recently said that the military could make due with 5 Dolphin submarines, rather than the fleet of six originally planned for the Israel Navy.