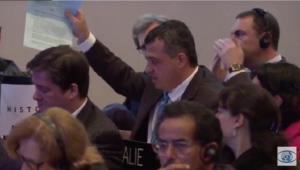 In attacking WHC’s approval of a text that ignored Jewish ties to the Temple Mount, he equated the Jerusalem resolution with the famous 1975 United Nations resolution that Zionism equals racism, “The fate of this resolution shall be no different than that of UN resolution 3379 adopted in 1975, which equated Zionism with racism. “That absurd resolution was cancelled 16 years later, but the moral stain still remains on all those who adopted it.

“It might take years in our case as well, until the ‘Jerusalem resolutions’ are eradicated from the annals of this organization.

“In 1975 it was Israel’s ambassador to the UN, the late Haim Herzog, who tore the paper of the resolution to shreds on stage and in front of the entire world.

“I have no intention of doing it in front of you today; not because of your dignity, nor because of the dignity of this organization, but simply because this resolution paper is not even worth the energy needed for tearing it to shreds.

“It will be much simpler and a lot more appropriate to place it in its rightful place, the garbage place of history” Shama-Hacohen said.

He picked up a trash can and placed it on the desk in front of him. A white sign was pasted onto the resolution that said in English, “History.”

Then he dropped it in the trash and added, “And this is the place for it” as he dropped it into the bin. “On one hand it will become one with similar resolutions adopted with regards to the Jewish people. On the other hand, it might get a bit crowded between uncountable UN Human Rights Council resolutions, the UN in New York and other diabolical ideologies for the destruction of Israel devised by past empires and dictators not worthy of us mentioning them.

“All of which have this in common — they all disappeared of the stage of history, existing no more, while the people of Israel are alive and well and a blue and white flag with the Star of David – Magen David – waving above our Jerusalem, our enteral and united capital.”

Earlier in his speech he said, “the battle for Jerusalem did not start with the last vote nor would it end with today’s. Israel is sovereign in Jerusalem and shall continue to exercise its sovereignty there, while Palestinians and other Arab nations continue to toy with imaginary and absurd resolution, which put to shame those who placed them on the agenda as well s those who raised their hands in favor,” he said.