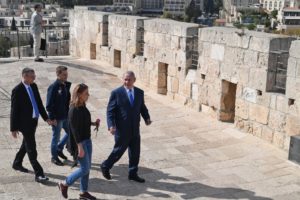 In Photos: Israel’s PM Benjamin Netanyahu surprised the 3,000,000th tourist to Israel, Ioana Isac, along with her partner Mihai Georgescu, in Jerusalem at the Tower of David Museum for a personally guided tour.
– Tourism Minister Yariv Levin, who surprised the couple at the airport, accompanied them on the tour.

Israel has had a record year for tourism. And on Tuesday, Prime Minister Benjamin Netanyahu showed his appreciation by surprising tourist number 3 million to arrive in 2017 with a personal welcome to the Jewish state.

Ioana Isac, 31, and her partner, Mihai Georgescu, suspected nothing as they arrived at Ben Gurion Airport from their native Romania.

As the couple passed into the arrivals hall, they were greeted by an incredible scene: flowers, balloons, a red carpet and Tourism Minister Yariv Levin, who promptly whisked them away in a limousine to meet with Netanyahu at the Tower of David museum in the Old City of Jerusalem.

Netanyahu gave the couple a personal tour, as well as conveying the appreciation of all Israelis, whose economy leans so heavily on incoming tourism.

Isac and Georgescu were also given an upgrade hotel suite, a deluxe visit to the Dead Sea, a helicopter tour of Israel and a private dinner with famed Israeli chef Nir Tzuk.