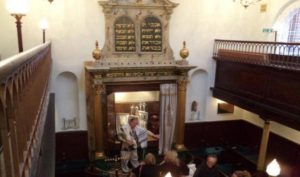 CCTV video shows Morgan walking to the back of the synagogue and smashing a window with an axe. He then returned with a can of gasoline and poured it into the broken window. He then lit the gasoline that flared back at him, leaving him to extinguish his own flaming cranium.

Morgan was first charged in connection with a fire at Exeter Synagogue on Saturday July 21, 2018. Following a joint investigation by local officers and Counter Terrorism Policing South West working with the Special Crime and Counter Terrorism Division of the Crown Prosecution Service (CPS), Morgan was further charged with collecting information and encouraging terror.

Morgan was given an indefinite hospital order and only the courts can consider his potential release. Morgan was also given a ten year terrorist notification order which means that he will be subject of long-term monitoring by the police and partners.

Exeter Synagogue sits within the old city of Exeter, Devon, and is the third oldest synagogue in the United Kingdom.

Originally built as a Sephardi synagogue for Dutch Jews trading in Exeter, it is now an Ashkenazi synagogue.