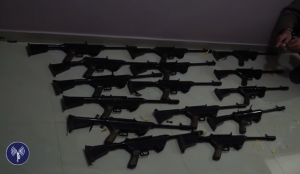 Israel’s Shin Bet and IDF forces confiscated 15 illegally produced automatic assault rifles in latest bust to stamp out unlawful weapons which are fabricated for nefarious use, including terrorism.

The location of the weapons stash was revealed during a Shin Bet interrogation of a Palestinian weapons manufacturer.

The successful mission was only the latest phase of an ongoing joint Shin Bet-IDF counter-terrorism operation in Samaria.

A similar raid as part of the same operation netted assault rifles, pistols and other weapons last month.