What happens to Christians under the proposed ‘Jewish State Bill’ ?

Minority religious groups are worried about the impact of the proposed Jewish State bill. But the proposed legislation seeks to only place in law Israel’s ‘Jewishness’, that’s already being practiced.

Christians in Israel are debating whether the proposed “Jewish State” bill will weaken Israel’s democracy by marginalizing minority religious groups, or whether it will strengthen the Holy Land as a unified state. 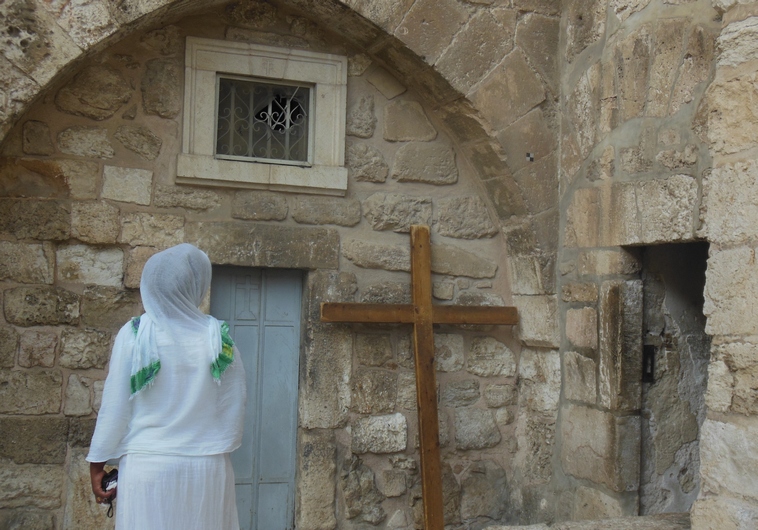 A Christian woman outside the Church of the Holy Sepulchre in Jerusalem. – Photo: ARIEL COHEN

The “Jewish State” bill legally defines Israel as “the nation-state of the Jewish people,” and reinforces the use of “Hatikva” as the national anthem, state symbols, use of the Hebrew calendar and the Law of Return. While these are not new developments in Israeli society, this would be the first time these Jewish national elements were enshrined in law.

Critics of the legislation believe that efforts to maintain Israel’s ‘Jewishness’ are outweighing the importance and necessity of keeping the state democratic for all citizens and religious groups.

The 158,000 Christians who call Israel home make up 2 percent of the population, according to a 2013 survey by the Central Bureau of Statistics. Approximately 80% of Christians in Israel are Arabs.

Israeli-Arab Christian MK Hanna Swaid told The Jerusalem Post that he is expressly against the “Jewish State” bill, stating there is not a place for a Jewish state at this time or at all in general, as “this bill formalizes and enshrines the status of Arabs as second class citizens.”

“For this purpose, there is no difference between Christian, Muslim and Druze,” Swaid said. “The bill does not speak about equality for Arab citizens in the State of Israel. In my homeland I deserve rights.”

The proposed legislation which seeks to ensure legal consideration for Israel’s ‘Jewishness’, also excludes minorities in certain ways. Arabic would no longer be considered an official national language, but rather would be given a “special status,” according to the bill.

“They speak of the flag, the anthem, all the symbols of Israel– as belonging to Israel, not to Arabs. But this is our state too, not just for the Jewish people,” Swaid said. “This is very frustrating for Arab citizens.”

Swaid spoke of the two Druze policemen who were killed in the Har Nof synagogue attack in Jerusalem last month. Both those men died protecting Israel, but under the “Jewish State” bill he believes they would be deemed “second class citizens.”

Not all Christians are opposed to the bill, though. Father Gabriel Naddaf, an outspoken priest from Nazareth who advocates national service for Christian Arabs, expressed his support for the “Jewish State” Bill.

Naddaf explained that although the State of Israel defines itself as a Jewish and democratic state, democratic principles are well-founded in law, whereas Jewish principles are not. But, in order for Israel to stay true to its founding purpose, it is important to define Israel as a Jewish state under law.

Father Gabriel Naddaf accompanied his eldest son Jubran to the recruitment office in Tiberias, where he will voluntarily join to serve in an elite unit and will join hundreds of Christians serving in the IDF, out of a sense of mission and belonging and the aspiration to contribute to his country Israel. – Facebook

“The minority group is claiming that Israel is a multinational country,” Father Gabriel Naddaf said. “Even the fundamental laws, which the Supreme Court turned into ‘constitution’ against all practicality known in the world, where it is mentioned that Israel is a Jewish and democratic county, were interpreted in a way that gives a clear supremacy to the democratic aspect over the Jewish aspect. The bill is meant to restore the balance that was broken in an attempt to erase the ‘Jewishness’ of the state.”

In the past, Naddaf routinely stated that Israel is the only nation in the Middle East where Christians can enjoy equal freedoms and rights.

The prominent Greek priest added that the Christians of Israel currently “enjoy freedom and equality in all aspects, and that for Israel to define itself as Jewish would not pose any obstacle for members of minority groups to live in peace in the country.”
Due to recent political developments, it is unclear if and when this bill will go to a final vote in the Knesset.