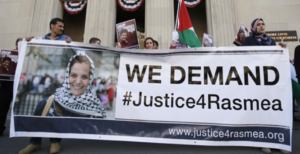 At the same time, Germany canceled Odeh’s visa and demanded she leave the country. Despite the attempts by Odeh and her supporters to allow her to stay in Berlin, including two court appeals, Berlin authorities decided she should not be allowed to remain and disseminate her anti-Israeli political propaganda.

In recent years she has become a sought-after lecturer at BDS organization conferences, including campuses in the United States. Last year, the US authorities expelled her for false reporting to the authorities.

According to the report, Strategic Affairs Mnister Erdan launched a political campaign aimed at his counterparts in Europe, including German Interior Minister Horst Seehofer, requesting that no legitimacy or funding be given to individuals and organizations appearing in the report.

Strategic Affairs Minister Erdan said “Rasmea Odeh, disguised as a human rights activist, is a convicted terrorist and BDS activist who came to Berlin to advance her anti-Semitic agenda and that of her friends.

“This is another victory for Israel against the BDS campaign. I and the Strategic Affairs Ministry will continue working to expose the true face of BDS organizations calling for the destruction of the State of Israel as a Jewish and democratic state.”