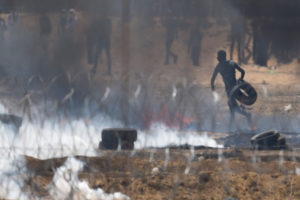 Some 10,000 Palestinians gathered by the Gaza border fence Monday morning and clashed with IDF forces deployed in the area ahead of the US Embassy opening ceremony in Jerusalem and the Nakba Day events. Fifty two protestors were reportedly killed.

The protestors burned tires and threw stones at the soldiers, trying to approach the fence. Palestinians said nine protestors were killed, including a 21-year-old east of Khan Younis and a 29-year-old near Jabalia, and several were wounded. An IDF quadcopter was shot down near Jabalia. The IDF fired gas grenades and warning shots at the protestors in response. Several thousand others were located in the tent area about half a kilometer from the fence.

Most protestors gathered in the northern area, near the Saja’iyya neighborhood, facing Kibbutz Nahal Oz.

A general strike was declared in the Gaza Strip on Monday to encourage residents to flock to the protest sites.

Egypt has also raised its alert level along the Gaza border, boosting its security forces in the area.

The IDF operated in several sites Sunday night to disrupt Hamas infrastructures planned to be used as a front base for terrorist activity on Monday and Tuesday. The IDF Spokesperson’s Unit said the army was prepared for a wide variety of scenarios and has boosted its forces in the area. IDF commanders are constantly evaluating the situation from the ground.

A closed military zone was declared in the fence area. Any activity in that area requires the IDF’s approval. No special orders have been issued for the home front. The IDF Spokesperson’s Unit stressed that the army would act against any terrorist activity, work to maintain the Israeli sovereignty and prevent attacks on citizens and soldiers.

Thousands of fighters, some from the Nahal and Givati Brigades, are reinforcing the routine security regiments in the Gaza Division and Judea and Samaria Division. The forces have been instructed to prepare for several radical scenarios, including shooting attacks or explosive devices that might be planted during the attempts to break through the fence. Another scenario is the abduction of a soldier after the fence is breached. The army is preparing for the possibility of armed Hamas members trying to infiltrate Israel together with the protestors.

A source in the Gaza Strip told Ynet, “If Hamas fails to bring 100,000 of protestors, it can just go home.” According to the source, if Hamas failed to bring that number of protests, “its motivation to carry out a violent act will grow.”

During the fifth straight Friday of mass clashes on the border (April 27, 2018), Palestinians burn hundreds of tires so the smoke covers their attacks on IDF soldiers in Israel. – Photo/ MAHMUD HAMS (AFP)

The protestors were expected to move between 12 to 14 demonstration centers in a bid to wear the forces out and create a distraction. In every center, there is a small group controlling the protestors and receiving movement instructions from a control center inside the strip.

Hamas has gone to great lengths to bring more people to the fence protests. All schools and higher education institutions in the strip have been closed for the day, and the organization forced merchants to declare a general strike so as not to create alternatives for the Gazan public. In addition, Hamas has offered the residents transportation to the fence area and to the different points of friction.

Sources in strip told Ynet that a failure to bring 100,000 protestors after the Gaza leadership’s massive and expensive campaign would affect the organization’s status and prestige. “If Hamas fails to bring 100,000 people to the protests after such an investment, it can hand back the keys and go home,” one of the sources sad.

According to the sources, a large number of protestors reduces the chances of a violent conflict and an escalation with Israel. “100,000 protestors will be a major show of force for Hamas and the organization will be able to hold onto this number to show the world that this is a non-violent mass protest.

“If Hamas fails to bring a large number of protestors and to reach this number, its motivation will grow to carry out a violent act like a mass crossing of the fence or a terror attack that will put the limelight back on Gaza. Hamas wants the world to focus on Gaza at all costs, whether peacefully or violently.”

Earlier Monday, the Shin Bet accused Iran of funding the recent protests in the strip. According to the organization, an investigation of a 19-year-old Hamas member from Gaza revealed the methods of the terror organization ruling the strip. The young man was arrested while making his way to Israel to steal security cameras and to cut the fence along the Gaza Strip.

His investigation revealed that Hamas was instructing its members to cut the fence and steal security cameras to help pull and bring down the fence and to disrupt the IDF’s activity ahead of Nakba Day. The organization is working to market its activity to the media as a popular uprising rather than as violent activity led by its members.

The investigation further revealed that Hamas members were taking an active part in the violent protest activities along the fence every Friday, carrying knives, iron scissors and bottles of petrol.

The Hamas members’ job, according to the Shin Bet, is to provide Gaza’s residents with tires and help burn them, in a bid to create thick smoke and convince the residents to enter Israel, throw Molotov cocktails and prepare flaming kites and hand them over to the violent activists.

The investigation further revealed that the Hamas members themselves are forbidden to approach to fence so as not to get killed or be apprehended by the security forces. If they manage to bring down the fence, they should enter Israel with weapons and carry out terror attacks.

The Shin Bet statement refers to another Gaza resident, 21-year-old Salim Abu Daher, who was arrested on April 28 after infiltrating Israel “in a bid to burn fields and groves.” He told his investigators that Hamas members in plain clothes were providing the protestors with incendiary materials and that the organization was funding the violent activity, including sending flaming kites into Israel.

Another Palestinian, arrested on May 4, said Hamas was encouraging children and teenagers to cross the fence to steal IDF equipment. A 13-year-old boy was wounded the same time after taking part in the infiltration to steal a security camera at the Karni Crossing.

Matan Tzuri and Daniel Salami contributed to this report.