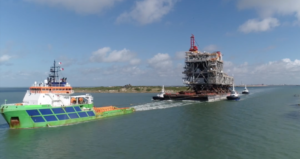 Five operational structures, the 38,000 ton topsides of the Leviathan platform, will make the approximately 11,500 kilometer cross-Atlantic journey, with the remaining barges due to set sail from Texas in the coming weeks.

The structures will be installed on top of the platform jacket by the largest offshore crane in the world, with the jacket – or foundations – lowered into the Mediterranean Sea in January. The installation will take approximately four weeks to complete.

Once assembled, project partner Noble Energy will commence a series of commissioning tests prior to initiating commercial gas flow to the Israeli market before the end of 2019 and, subsequently, to neighboring countries.

Delek Drilling, Noble Energy and Ratio Oil Exploration have invested $3.75 billion in the development of the Leviathan Reservoir since its discovery in 2010.

The reservoir, one of the largest discovered worldwide in the last decade, is expected to contain up to 605 billion cubic meters of natural gas, equivalent to 65 years of domestic gas consumption.

In addition to domestic supply, Israel is also due to become a significant energy exporter to its neighbors.

In February 2018, Delek Drilling and Noble Energy signed a $15 billion decade-long deal to supply 64 billion cu.m. of natural gas to Egypt from the Leviathan and Tamar gas fields, with the latter already supplying natural gas to Israel since 2013.

Once the Leviathan field commences operational, the partners expect to sell at least 9.91 million cu.m. of natural gas per day to contracted customers in Egypt. Initial gas delivery through the EMG pipeline linking the Israeli and Egyptian networks is expected to occur from the Tamar field.

The deal with Egypt follows a September 2016 agreement worth $10 billion between Jordan’s National Electric Power Company Ltd. and the Leviathan project partners to supply a gross quantity of 45 billion cu.m. of natural gas to Israel’s eastern neighbors over a 15-year period.

The construction of a proposed $7 billion, 2,000 kilometer underwater pipeline connecting Israeli gas to Greece, Italy and Cyprus is expected to be approved by the countries later this year, but will also require European Commission approval.