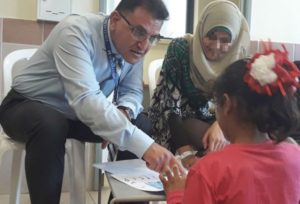 The patients, Israeli medical officials said, were not the walking wounded of the seven-year-old Syrian civil war but children with chronic health problems coming across the frontier for a day’s treatment in a hospital in northern Israel.

A Syrian kid, that was rescued by #IDF soldiers, drawing a Syrian and an Israeli flag in a hospital in #Israel.#GivePeaceAChance

Israel says it has treated between 4,000 and 4,500 war casualties from Syria since a humanitarian aid program, was begun some five years ago.

The group of more than 40 mothers and children that crossed over in the pre-dawn hours of Wednesday were among the 3,000 Syrians who Israel says have received separate treatment in what it calls “Operation Doctor’s Appointment”.

Watched by Israeli soldiers with night-vision equipment, one woman—carrying one child and holding the hand of another—stepped through a gate built into Israel’s security fence in the Golan Heights.

After a brief security check, she joined others at the roadside to wait for a bus that would take them to Ziv Hospital in the northern town of Safed, where a medical clown entertained the children.

“They are treated in hospital and go back the same day,” said Major Sergei Kutikov, an Israeli military health officer. “Sometimes they return twice or three times for further treatment or … surgery.”

Israel, which captured the Golan Heights from Syria in the 1967 Six-Day War, has largely stayed out of the current conflict.

But it has carried out scores of air strikes on suspected Iranian or Hezbollah deployments and arms transfers in Syria, and only hours after the latest batch of patients came across, sirens sounded in the Golan when an Israeli missile intercepted a drone from Syria.

For Israel, the medical aid program can help win hearts and minds in border areas where the number of refugees has increased in recent weeks as Syrian President Bashar Assad’s forces advance in an offensive to recover southwest Syria.

Michael Harari, a pediatrician at Ziv hospital, said medical infrastructure in southwest Syria has largely broken down, and groups of Syrian children are brought to the facility every two to three weeks.

“We were afraid in the beginning to come (because we regarded Israelis) as Zionists and enemies,” said one woman, who brought her son for treatment. “It’s the opposite.”